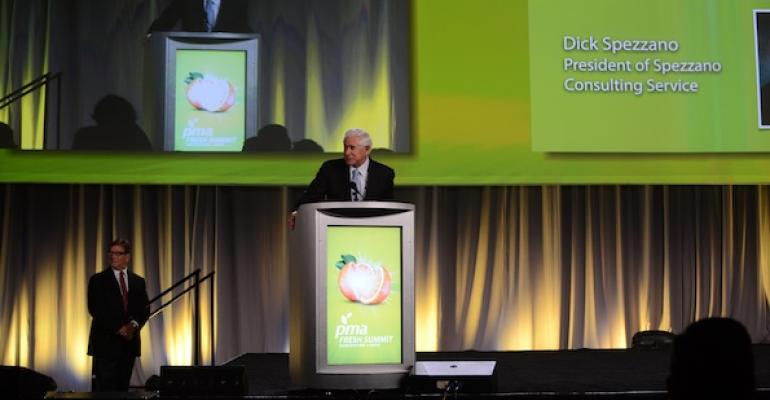 At the beginning of Fresh Summit each year — at the start of the popular brunch general session — PMA honors an industry veteran with the Robert L. Carey award.

Carey was the longtime PMA CEO that is credited with transforming the trade group during his 38 year tenure. This award presentation is always heart felt and especially so because Carey passed away last year after the 2013 award was given.

“Bob provided the leadership and vision that took this organization from near bankruptcy and less than 100 members to the strong, vibrant global organization it is today.

“In his honor this award recognizes a person who has demonstrated outstanding leadership and an uncommon commitment to PMA and the produce industry,” said Jay Pack, last year’s recipient of the award.

The 2014 award was given to Dick Spezzano, a current consultant and former retailer.

“He made the Vons chain recognized nationwide for best in class for produce merchandising,” said Pack.

After leaving Vons, Spezzano moved to consulting with both retailers and suppliers.

“It’s not an easy transition going from the guy giving out purchase orders to the guy asking for them,” said Pack.

Spezzano participated on many PMA boards and was Chairman of the PMA Board in 1994.

Pack credited Spezzano with a progressive stance on using UPCs in the produce department and PLUs for bulk items.

“The impact of his leadership on the produce electronic identification board was felt across North America and has since spread across the globe.”

Spezzano was recently named chairman of the board for the PMA Foundation for Industry Talent.

“This is a man who epitomizes what it means to give back to the industry from which he has worked for 50 years.”

Editor's note: This post has been updated to correct a typo in the former title of Robert L. Carey.