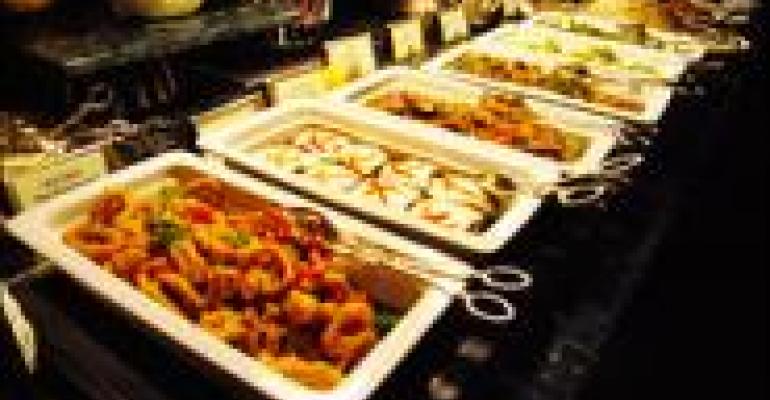 Prepared Meals with a Side of Health

The recession spurred many people to put down the restaurant menus in favor of taking a number at the supermarket prepared foods case. Statistical and anecdotal evidence shows that retailers fared well during the economic downturn, with increased sales of rotisserie chicken, fresh meal entrees and dinner kits that could feed a family of four.

And yet, the end of the recession hasn’t meant that the bonanza is over. A new report from the research firm Technomic Inc. shows that consumers are still purchasing more fresh meals from supermarkets and related retail venues than they did before. At the same time, the retailers have been able to capitalize on the demand by improving quality, variety and freshness.

One of the more notable changes from past incarnations of home meal replacement is that consumers today seem all too happy to buy quick meals at the same place they buy their groceries, and so we’ve seen supermarkets stealing share from restaurants.

But retailers need to be aware of the health component that can be easily lost amidst the bubbling mac ‘n cheese and baskets of fried chicken.

Technomic researchers found that two out of five consumers say they take nutrition into account when selecting prepared foods at retail, compared to one in five at restaurants. This makes sense, since the supermarket is a decidedly more practical destination, where people are already in the label-reading, calorie-counting mindset. Companies may think they’ve got nutrition covered because they offer salads and other cold vegetables. Yet many side dishes and hot entrees, delicious though they may be, are big question marks when it comes to health. How many calories per serving? How much sodium? How many added sugars? In light of the new dietary guidelines and initiatives like Wal-Mart’s recently announced healthy eating goals, these questions become increasingly important.

A quick scan of several mainstream retailers’ prepared food options, as listed on their websites, finds no mention of health or calories or “light” options. The focus is on “fresh” and offering low prices, and that’s understandable. But as all this is going on, restaurants like Applebee’s are rolling out meals under 500 calories. Places like New York City and California, meanwhile, require calorie counts on menus, and restaurants elsewhere have taken the initiative to add this information on their own.

So although restaurants aren’t top of mind these days when it comes to nutrition, they’re quickly trying to change that. Supermarkets, who have made products throughout their aisles healthier and more transparent, shouldn’t overlook their prepared foods in this way — especially after doing so much to move them past those hazy days under the heat lamp.