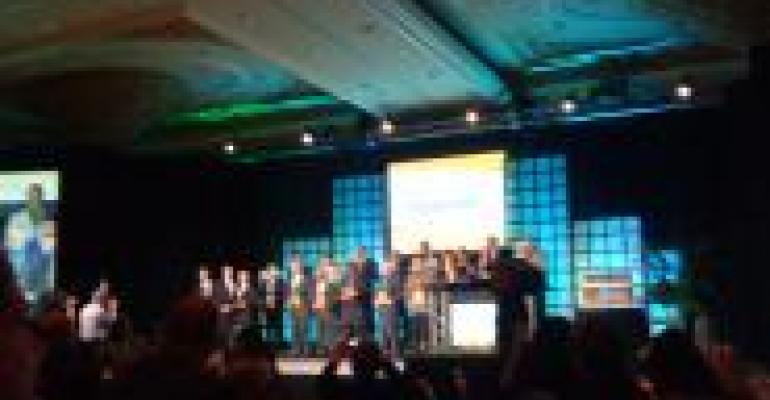 Earlier tonight, the United Fresh Produce Association honored the 25 recipients of its 2010 Retail Produce Manager Awards, during a special ceremony at the association’s Chairman’s Banquet and Annual Awards Reception. All finalists received complimentary registration, travel and hotel accommodations to the convention, and six “grand prize” winners were selected tonight to receive a $1,000 cash prize “for their exceptional service to the industry.

“These produce managers are the people on the front lines of our businesses every day,” said Reggie Griffin, vice president of produce procurement and merchandising for Kroger, and chairman-elect of the United Fresh Produce Association. “They make Kroger stores more successful, and they make you [retailers in the audience] more successful, because we sell more cases. Many years ago (and we won’t go into how many years), I was a produce manager in a Kroger store, so I know personally what they have to do every day. Except, when I was a produce manager, we only had 50 SKUs. We carry more than that in organic now. So, what they do every day, and how they represent us as companies—but more importantly, how they represent us as an industry—is most critical.”

In alphabetical order, the grand prize winner are listed below, along with excerpts from bios provided by United Fresh:

Valerie Lambert, K-VA-T Food City, Wise, Va.—Valerie Lambert has long been recognized as one of Food City’s leading produce experts and is one of the company’s designated trainers. Always eager to participate in company display contests, her creative merchandising skills have made her award-winning among the company, and her department has received formal recognition for increases in distribution and gross profit percentage.

Lisa Paulis, Vons, La Jolla, Calif.—Lisa Paulis’ store is located in downtown La Jolla, an upscale community with a large amount of tourism where customers demand variety and specialty produce. To meet her customer’s requests, she changed her ordering process, which has resulted in a department full of exotic produce. Lisa’s high-grossing organic section features a massive build-out for increased selection, with 96 linear feet of refrigerated organic produce.

Rick Stolarik, Big Y Foods, Tolland, Conn.—Frequently asked by [his] company to develop new display ideas for the chain, Rick Stolarik is constantly thinking outside of the box to create eye-popping displays. He is Big Y’s “go-to” person for grand openings and special events and is a top pick for mentoring produce trainees with their merchandising skill set. More than twenty current Big Y produce managers can give Rick credit for helping them to reach the management level.

John Thut, Bel Air Markets / Raley’s, Sacramento, Calif.—With over 19 years as a Bel Air Markets produce manager, John Thut was voted by his fellow produce managers as one of the best in their district. During the summer months, his front lobby displays are eye-catching with color, product categories and departmental tie-ins … Food safety is also a top priority for John and his produce team, and last year his department received a perfect 100 audit score.

Willie L Williams Jr., Kroger, Englewood, Ohio—In the grocery business for over a quarter century, Willie Williams started in an Air Force commissary where his father was stationed when he was just 14. Willie is committed to being the best in the market and with a 92-foot green rack to set every day, he has taught his team to take pride in everything they do … Kroger has recognized Willie for his outstanding work ethic and leadership ability by featuring him on several TV, radio, newspaper and flyer advertisements.

John Wombacher, Hy-Vee, Iowa City, Iowa—About 150 customers attend John Wombacher’s weekly live educational demonstrations focusing on fresh produce consumption, preparation and procurement of new and seasonal items like pummelos, jicama, blood oranges, pomegranates and orange cauliflower. With the 5-A-Day message as the centerpiece, and frequent collaboration with the store dietitian, John provides evidence-backed health and nutrition education about each product at its point of sale. In the summer, John sets up a mini farmers market outside the store on Saturdays to feature locally grown produce.

Congratulations to all of this year’s winners!