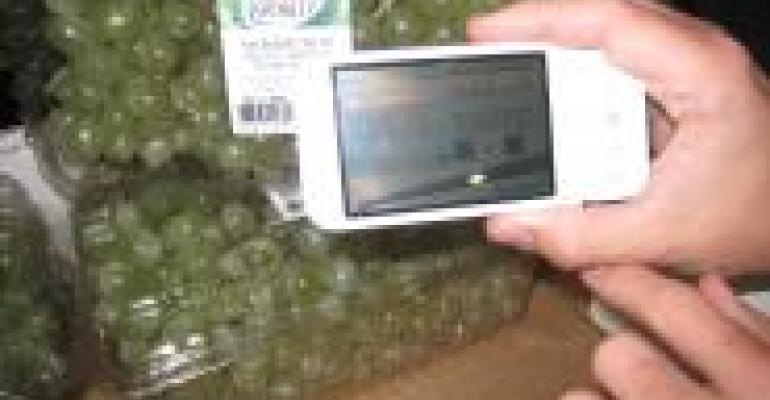 As I mentioned in an earlier post, the Produce Traceability Demo Center was one of the coolest features of this year’s United FreshMarketplace / FreshTech expo. The idea for the new center was hatched during a United Fresh roundtable event in January. Basically, 13 different traceability solutions providers all hosted tabletop displays in an area near the back of the show floor, offering attendees a location to browse and ask questions about issues including industry’s Produce Traceability Initiative.

As many of our subscribers know, Michael Garry is SN’s resident tech expert, and has been covering many of the more technical aspects of PTI, so at the risk of sounding out of touch, I’ll just say that I am amazed at how quickly the supplier community has responded to the initiative, developing solutions that work not only at the case level, but at the item level as well.

If you’ve attended any seminars on traceability or foodborne illness outbreaks during the past three or four years, you’re probably familiar with that ubiquitous slide where a person in a Japanese supermarket is using his or her cell phone to snap a picture of a 3d bar-code on a product. These bar-codes allow customers to view detailed product information on their phones, such as farm of origin and other content.

Well, that technology is finally here, as a Smartphone app produced by HarvestMark, the fresh food traceability arm of YottaMark. The 3-d barcode is part of their PTI compliant labels, which also feature regular barcodes for scanning Global Trade Identification Numbers and other information through the supply chain. Elliot Grant, chief marketing officer for YottaMark, gave me a brief demo using a T-Mobile G1 phone, and the gee whiz aspect was pretty tangible. Snap the photo of the barcode on a clamshell container, and in 5 seconds, you’re looking at information about where the product was grown, who the farmer was, and whether or not the product was involved in a recall--as much traceback and marketing information as the grower wishes to display to shoppers. The new app is a finalist in the Food Safety portion of United’s first New Product Award competition.

Grant acknowledged that shoppers won’t be lining up to snap photos of their strawberries every time they go to the store, but noted that fans of the application “are going to talk to others. They’re the vocal minority that will be showing this to friends and family and giving feedback to growers.”

And, as people become more familiar with the square barcodes on fresh foods, the hope is, they’ll start to identify those brands with traceability and safety. Growers and packers have already placed HarvestMark’s PTI compliant labels on 250 million items, Grant noted.

Similarly, FoodLogiQ is another finalist in the new product, food safety category, thanks to its mobilemarQit solution. mobilemarQit is a short code on the company’s PTI compliant labels. Using any cell phone or mobile device, shoppers can text message the code to a number printed on the package (for free), to find out more information about a product, including farm of origin, information about the grower, brand information, recall notices or even coupons.

The remaining finalist featuring traceability technology in the food safety category was RedLine Solutions, which is best known among packers and processors for its RedLine Cooler solution, which tracks products from the time they’re received in cold storage and processing facilities until they’re shipped out to customers. Up for the award is their new solution, RedLine Field, which will be available later this year. RedLine Field uses mobile data collection technology to label cases and harvest bins in the field, for PTI compliance throughout the supply chain. The system will record exact field location using GPS technology, as well as date and time and harvest crew, and transmit all of that data to the grower’s office.

“What is important with PTI is the transfer of info from each person in the supply chain,” noted Todd Baggett, CEO of RedLine Solutions, later adding that the company’s aim is to “maintain lot-level integrity all the way through to the retail store.”

Baggett ended our conversation on a very positive note, adding that “once the [produce] industry has show that it has got this under control, we’re not going to see these mass recalls anymore.” With seamless, standardized electronic traceability in place industrywide, problems will be pinpointed quickly enough to avoid implicating and recalling entire commodities, like bagged spinach in 2006, or incorrectly implicating tomatoes last summer.

Regardless, the ballots are being counted tonight, so best of luck to these three traceability solutions companies. The transparency they’re helping bring to the produce industry is a huge step in the right direction toward regaining the confidence of consumers who have grown really weary of food safety scares.