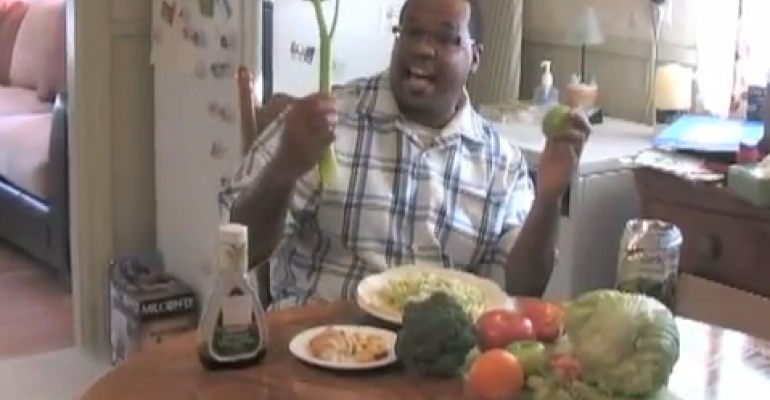 The Rap on MyPlate

It’s not likely to earn any record deals, but as messages to eat your fruits and vegetables go, “Wrap Rap” is solid gold. The one-minute music video was one of three first-place winners recently selected in the MyPlate Fruits and Veggies Video Challenge, a promotion put on by the U.S. Department of Agriculture in which contestants were asked to talk (or sing) about the clever ways they’re meeting MyPlate’s daily-recommended fruit and vegetable intake without breaking the bank. Wrap Rap’s clever message: Put it all in a wrap.

Unveiled last summer, MyPlate has gathered healthy momentum as a colorful, easy-to-understand reference guide. Unlike its dreadful predecessor the Food Pyramid, which flummoxed kids and adults alike for years, MyPlate centers its advice on a practical object and sets simple, actionable standards without referring to any of the complicated math or nutrition science they’re based around.

To some people, MyPlate is downright inspirational. To supermarkets, it’s becoming a helpful marketing tool. HEB, which operates more than 300 stores around Texas, gave the logo a prominent role in its new “Healthy at HEB” marketing platform. The Myplate emblem appears, overlaid with the company’s own logo, on the program’s online recipe portal, emphasizing its importance as both a symbol and as a practical guide for shoppers to follow.

Retailers like Schnucks and Bi-Lo have also utilized MyPlate in recent promotions. Schnucks ran a contest called MyTopPlate All Stars that asked customers to send in pictures of kid-friendly meals that followed the MyPlate recommendations. Finalists were put up on Facebook for a final vote, with the winners receiving store gift cards and money. Bi-Lo, meanwhile, introduced three new shelf tags to its labeling system based on MyPlate’s recommendations.

As an aspiration, MyPlate holds a lot of appeal for consumers. A study by the communications firm M Booth found that 46% of Americans are aware of the MyPlate guidelines, and 60% of that group says they’d like to follow them or have planned to do so.

The reality, however, is that it’s a struggle for these people to follow the guidelines. According to The NPD Group, the average consumer follows MyPlate recommendations only seven days out of the year. Even when one of those days is achieved, consumers still report eating too much.

Indeed, that colorful logo belies a harsh truth — that in a nation battling an obesity epidemic, healthy habits don’t come easily. Yet MyPlate has shown it resonates with consumers, and it has the backing of the government and numerous other companies and organizations. A unified front, with help from the supermarket sector, could very well bring about positive change.