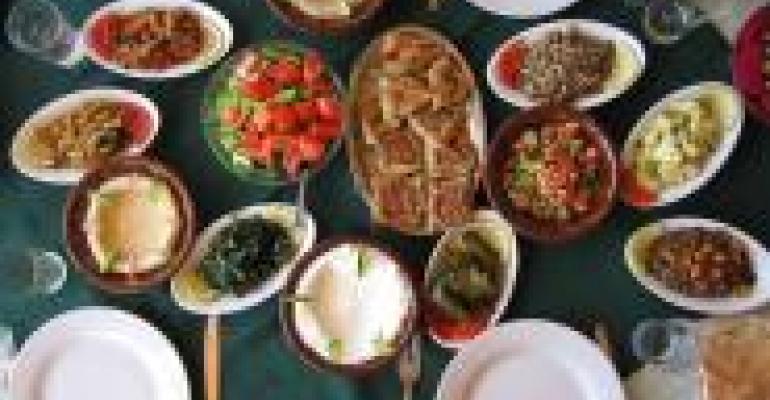 Lots of times foodservice menu trends translate pretty well to the supermarket shelf, and visa versa. The two channels are distinct but the constant crossover isn’t that surprising when you think how the line separating them is pretty blurred. Lots of retailers offer sit-down areas for meal consumption. Examples? Wegmans Food Markets typically devotes a whole corner of its giant stores to fresh meal production; Wal-Mart brings in marquee names like McDonald’s or Subway.

Meanwhile, foodservice providers market retail versions of their best-selling menu items. If you liked TGI Friday’s margaritas at Happy Hour last week, then check out the pre-made mixer in the beverage aisle; the same goes for White Castle hamburgers in the frozen food section.

There’s more evidence of compatibility found in the annual trends reports sent out by various industry observers every December. We’re talking about the “Best of 2011” and “Look Ahead to 2012” lists sent to news outlets. This year is no different.

One of the predictions that seems almost universal is one described as “regional cuisine.” Both Timemagazine and the research firm Mintel foresee consumers moving closer to foods and cooking styles tied to specific parts of the country.

This is a throttle-down from the global aspirations that a lot of menus have been striving for over the past decade. Instead of discovering the intricacies of Oaxacan mole sauce or the decadence of a Kyiv torte from the Ukraine, it seems as if Americans are refocusing on the good things right here at home.

“Whether it’s Kansas City or Memphis barbecue, New England Chowder or Low Country grits, more consumers and restaurants are looking at the regions and cities in the U.S. to identify the ‘Best of’ cuisine,” wrote Mintel researchers.

The source of this interest, naturally, is local foods, which continues as a mega trend in its own right. TheNational Restaurant Association parses local into several distinct trends: Locally sourced meats and seafood, locally grown produce, locally produced wine and beer, and even hyper-local items.

Time takes things a bit further and predicts that chefs will spend more time out of the kitchen and in the woods, literally foraging for greens, herbs and mushrooms… At least, writes Ozersky, “until some chef digs up the wrong mushroom and sends diners on a toxic trip they won’t thank him for.”