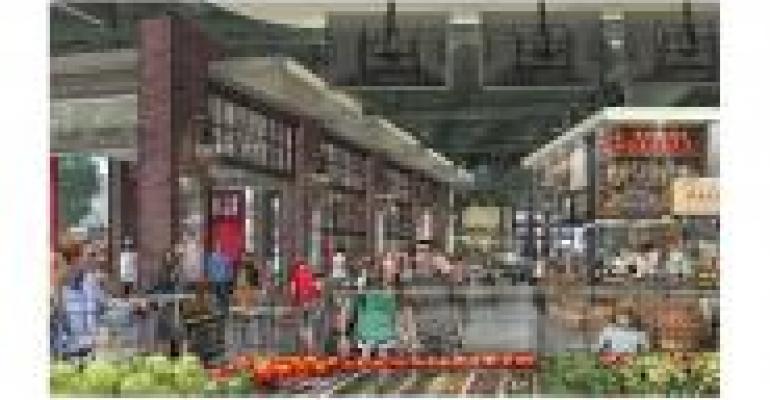 Like many American teenagers, I did hard time at the mall, both as an employee and then, as part of that much-honored pastime devoted to hanging out. And so I feel qualified in stating that the premise of “healthy eating” at the food court is pretty funny, at best.

Choices have forever been standard and haven’t really changed over the years: Pizza, Chinese, steak sandwiches, anything fried. Sure, maybe now there is a salad station or two, and certainly, there are healthful choices within individual restaurant menus, but the mall food court is still designed around the concepts of convenience and speed — move ‘em in, feed ‘em and get ‘em out. Retailers paying high rents don’t want potential shoppers lounging at the table.

So, I read with interest the news from Westfield Old Orchard, the upscale shopping mall located in Skokie, Ill. The mall closed the food court in September and is in the process of re-inventing it with help from Richtree Market Restaurants, the Toronto, Canada-based operator of Mediterranean market-type restaurants that feature lots of action stations, theater and fresh foods for eat-in or take-out. Click on the photo above for an artist's rendering of what it will look like.

The Old Orchard mall’s space will be built out to include open kitchens and a natural food showplace, “a world-first culinary-focused dining and ‘green’ food shopping venue” with a number of gourmet food stations, as well as market offering natural, organic and sustainable artisan specialty foods, seasonal fresh produce and related items.

“It will be a convenient, one-stop adventure,” says Deborah Mattes, senior general manager of the operation. “We believe the venue will also be a powerful, magnetic destination for visitors and tourists.”

Indeed, Richtree has a truly global perspective. Foodies may remember that this was the same company that imported the Movenpick Marche’ concept from Switzerland in the 1990s, with multiple outposts in and around Toronto, as well as in supermarkets like Loblaws. Each unit was a variation of — or improvement on — the European market theme that’s now going into Old Orchard.

Richtree even tried to get Americans interested, opening the first Marche’ outlet inside Boston’s Prudential Center in 1998 (it closed in 2004). It was a direct competitor with the EatZi’s chain, which had a presence in New York (at Macy’s) as well as Atlanta and Dallas. The late ‘90s were the halcyon days of home-meal replacement.

More than 10 years later, the Richtree organization is again imprinting itself on the minds of Americans, with a proposal that is at once unique, and challenging. The added elements of natural/organic and sustainable menu items raises the stakes, but the fact the company is bringing this concept back with these components speaks well of the outlook for whole health — as well as for this current generation of mall teens looking for something to eat.