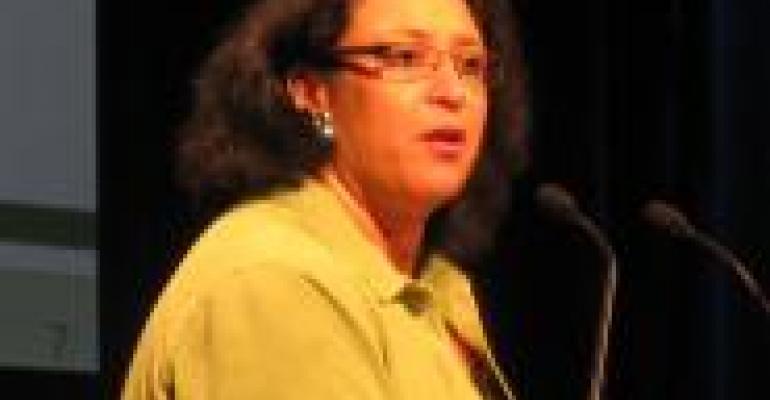 The Researcher & The Conversationalist

Dr. Rosita Thomas, Thomas Opinion Research, first on the roster of speakers on opening day of IDDBA's Dairy-Deli-Bake 2010, got the day off to to a positive start with some stats that show the recession might be letting up a little, or at least that food shoppers feel they have more money to spend. There's no guarantee though that that money will be spent at supermarkets so supermarket deli and bakery operators had better take heed, Thomas said. She offered advice on how to stay ahead of ever-growing competition from other venues. More advice in the same vein came later in the morning from another speaker, TV personality and self-defined conversationalist Rachael Ray. Both women advised retailers to tell their customers more about their products and how to use them.

Thomas's research, conducted this spring on behalf of IDDBA, showed 82% of deli consumers believe supermarket deli purchases are fresher than packaged goods, and she strongly suggested supermarket retailers take advantage of that. "Simply make a big point of how fresh the products are," Thomas said. A full 44% of respondents said they'd buy more from the supermarket deli if they knew how long the products had been in the deli case. More than 30% said a they'd buy more if they knew how long the products would last. Some said they'd bought products that spoiled to quickly and 31% of those said they would not recommend their deli to friends or family. Freshness was paramount in consumers' minds.

In fact, for the first time since she's been conducting deli/bakery consumer research for IDDBA, fresh rivaled convenience for customers' top priority when buying deli and bakery products, Thomas said.

While 31% of respondents said they had more money to spend than they did two years ago compared to only 17% who said that in 2009, customers had numerous complaints about supermarket delis. A remarkable 70% said they'd had at least one big, bad experience with their supermarket deli and smaller percentages had complaints about freshness, long waits for service, and limited healthy choices available. What is not surprising is that 85% of respondents said they did not tell store personnel about their negative experiences. They did, however, tell their friends and relatives. In fact, only 34% said they'd recommend their supermarket deli to friends or family. Meanwhile, competition is not going away.

"The number of supercenters/discount shopping venues has increased dramatically," Thomas said. "And a greater percentage of consumers are using the internet for commerce."

Thomas suggested retailers give specific information about their deli products. For example, when they they were made, how long their shelf life is, etc., how to store them. The increasing number of health-conscious consumers particularly said labels help them a lot when buying healthy products. But there are so many ways to dispense information, both women said.

Ray, in her presentation, suggested a supermarket's website is an ideal place to offer valuable information to customers and to find out what they like and don't like.

"What we [retailers] can offer is a voice, a space where they can blog. Ask them what they like. Ask if their kids like it," Ray said. "Make it really interactive."

Getting associates involved, too, is important, she said. Ray, who hails from upstate New York, cited Wegmans [Rochester, N.Y.] as a good example of a retailer who is successful at educating associates and actually getting them interested in the products they're selling.

Asked if she were an activist when it comes to food, Ray said, "No, I consider myself a conversationalist. I believe we need to help consumers. I want to get them excited about food."