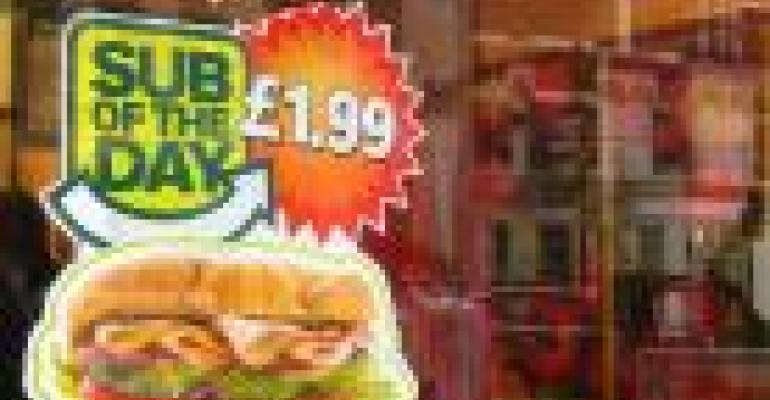 The Subway sandwich chain zoomed to the top of the healthy fast food list in 1999 when it discovered Jared Fogle, the college kid who shed dozens of pounds by going on the “Subway diet” that’s centered on the QSR chain’s low-fat sub choices.

Jared keeps chugging along almost 12 years later. Just this past November, he completed the NYC Marathon with a time of 5 hours, 13 minutes and 28 seconds, finishing in 36,968th place out of 44,829 runners who completed the event.

The company itself has gained fresh honors, which has caught the attention of the business world. Subway is now the world’s largest restaurant chain, surpassing the long-time champion McDonald’s. The official count was 33,749 units at the end of 2010, compared to Mickey D’s 32,737 units. Somewhere, Mayor McCheese is fuming.

Aside from the sheer numbers, one of the differentiating factors that sets Subway apart is that every single one of the restaurants is franchised, unlike McDonald’s, which operates a sizeable stable of O&O restaurants. These individual owners have a bit more leeway to cater to local preferences (insofar as their franchise contracts allow them to).

Many of them continue to run with the “better-for-you” health theme in their market area advertising, and it’s a trend many operators are picking up. According to an informal survey by Advertising Age, Subway’s “Eat Fresh” slogan is just one in a growing number of marketing campaigns centering on wholesome ingredients, clean labels and premium end products.

One industry observer points out in the article that fast food operators are actually moving away from specific health labels in favor of terms that are more ill-defined and open to interpretation. Gone are the menu call-outs like “low-fat” and “low-carb.” Instead customers are finding key words like “Natural” and “Local.”

“It’s focusing on buzzwords that are vague but that still evoke a positive feeling toward the food and toward the restaurants,” Darren Tristano, executive vice president at the foodservice consulting firm Technomic, told Ad Age. “The perception is driving the reality.”

All stakeholders in the food industry, including supermarkets, know that one of the most nebulous healthy definitions out there belongs to “Natural.” What does the word mean? When will the U.S. Department of Agriculture issue its long-awaited refinement of the term? What influence do public interest groups have whenever they issue warnings and complaints about companies that abuse the term?

These are questions being hashed out in public view while it continues to be used (and misused) in all sorts of wellness-related marketing materials. Even with its fruit parfaits and oatmeal, McDonald’s isn’t known for its healthy menu items — it never intended to be. Subway has been able to carve out a niche in that area, and now it’s the thing to do.

Take Arby’s, for instance. I love their roast beef sandwiches, but their new ad campaign plays up the buzz words with its Angus Three Cheese & Bacon sandwich. It’s Arby's first premium Angus-beef offering, but it’s not what most people would consider healthy.

Like supermarkets, restaurants need to know where to draw the line — lest it be drawn for them.