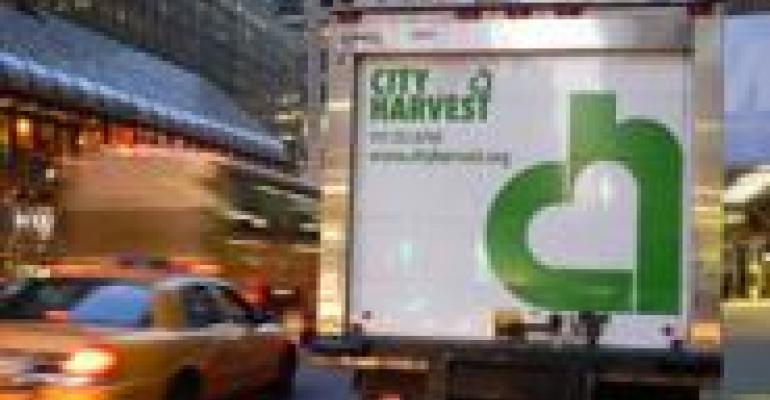 We’ve written a lot recently about supermarkets cutting down on the amount of unsold food they throw away. It’s a growing trend in the industry, and one that begs for closer examination — a nuts and bolts look, if you will, at where exactly all that food goes, and how it gets there.

We recently had such an opportunity when representatives from City Harvest, a New York City food rescue operation, stopped by the office to talk about their work with local retailers. Started in 1982, City Harvest collects food from restaurants, supermarkets and various other donors, and distributes to more than 600 social agencies throughout the five boroughs. In all, the organization feeds more than 300,000 people per week.

Whole Foods, Trader Joe’s, Pathmark, Food Emporium, and Costco are just a few of the supermarkets that work with City Harvest. Workers at these stores set aside culled produce, perishables that have reached their sell-by date, and other items they’ve taken off shelves, which City Harvest employees then collect and distribute to soup kitchens and other agencies on a daily basis.

As Matthew Reich, vice president of food sourcing for City Harvest explains, the leftovers they get aren’t always pristine. But they’re still safe to eat and taste just fine.

City Harvest employees are trained in safe handling practices, and the trucks they drive come equipped with refrigerator and freezer space to keep perishable items fresh.

And the focus is definitely on fresh, perishable items and other healthy foods. All told, 60% of the food City Harvest rescues is fresh produce. That’s the highest percentage of any food rescue agency in the country — largely due to NYC’s compact layout that allows for shorter routes, as well as large produce markets that the agency has inroads with, like the Hunt’s Point Terminal Market.

Feeding America, City Harvest’s parent organization, wants to double the amount of produce its agencies bring in. Towards that end, City Harvest recently signed a lease on a 45,000-square foot distribution center in Long Island City, Queens that will serve as a hub for logistics and quality control.

All in all, the journey from shelf to soup kitchen is a smooth one. There are bumps in the road, however, such as supermarkets concerned with liability issues and keeping store workers vigilant about not throwing food away. The Good Samaritan law protects them from liability. Staying on top of retailers, though — that takes a little more work.

“We’re constantly reminding them, constantly checking in,” said Shannon Barbuto, director of food sourcing for City Harvest. “They’re so busy, and we’re not always at the forefront of their minds.”