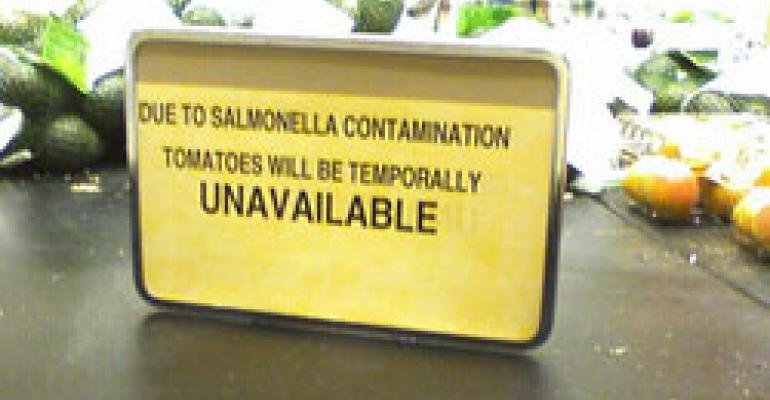 Now that it's OK to eat tomatoes, let's talk turkey: The most obvious losers in this most recent foodborne illness outbreak might be farmers — but the silent victims are supermarket retailers, who have to suffer the questions, the doubt and the loss of confidence expressed by shoppers.

Many supermarkets I visited during this ordeal were diligent in erecting signage at their tomato displays, in turn stating the known facts about the salmonella saintpaul outbreak, followed by reassurances that their suppliers had been cleared by the feds and that their products were safe.

Yet the displays stayed full - those big, beautiful summertime pyramids and stacked clamshells of red rounds, plum, Roma, Ugli, heirloom, local, grape and cherry tomatoes piled up in front of you like a giant Stop sign. Retailers did everything right to reassure their customers but the matter was completely out of their hands.

This being stuck in the middle is what makes the supermarket business so tough, particularly in dealing with commodities like produce, meat and seafood. Compared to five years ago, there are a lot more brand names in these categories, but bulk displays retain a level of anonymity that comes back to haunt retailers at a time like this. Consumers, seeing no label or name on the product, tend to fault the retailer who's selling it.

This is why retailers should support any effort to develop new safety standards and implement a thorough traceback system. Hit with several big-time recalls recently, consumers are all for action, according to the AP-Ipsos poll of 1,000 adults conducted last week. One shopper quoted in the survey said she had all but "given up" on supermarket produce and now patronizes farmers markets and like venues.

"I see the same farmers every single week," she said. "You meet the people and you see where the [produce] is coming from."

Produce buyers can make that claim — and it seems now that consumers want to, as well.