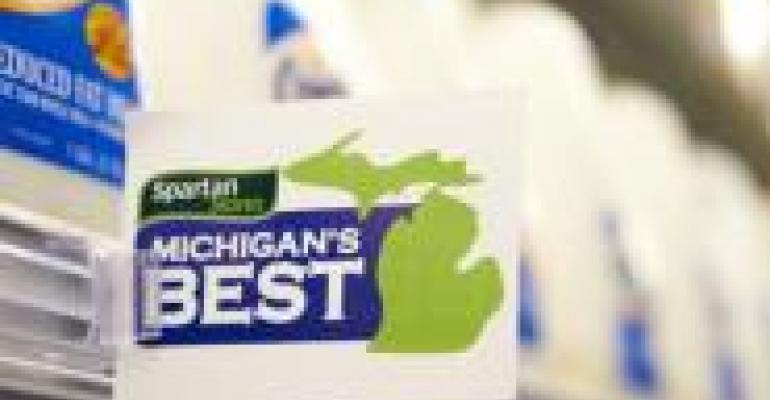 The fact that it’s Michigan we’re talking about means the program has definite economic undertones. This isn’t local for local’s sake – Spartan promotes Michigan’s Best as a significant booster to the state’s ailing economy (from April 2006 to May 2010, Michigan consistently reported the highest unemployment rate in the country; Nevada recently beat it out by 0.4%. Michigan’s most recent number stands at 13.6%).

He goes on to say that local products such as fresh fruits and vegetables are healthier options because they can be on the shelves within hours of being picked.

“Local products also have lower food miles, meaning they are shipped shorter distances, which requires less gas and is better for the environment," he added.

But make no mistake – in this case, “local” means jobs. The news release cites statistics from the Michigan Department of Agriculture showing that, if each family in Michigan started spending $10 per week of their grocery bill on Michigan products, “we would keep more than $37 million in Michigan, each week.”

What’s so different about Spartan’s efforts that it merits pointing out? First, you have to admire the forthright, plucky state boosterism going on here. Second, it’s a refreshing departure from the bucolic gauze that seems to wrap all of our impressions about local foods.

Sure, there’s an economic message in all local food marketing but not on the scale that Spartan is using. For example, some of the companies listed are known to everyone: Vlasic (pickles), Welch’s (juice and preserves) and Sarah Lee (baked goods). There’s also a number of private-label items and vendors known only to Michigan shoppers, such as Hudsonville (ice cream) and Kay’s (deli salads).

After only a year, Spartan is adding 600 products to the 2,400 products it started with last year. An additional 30 retailers have signed on to participate. This is “local” at its civic best.