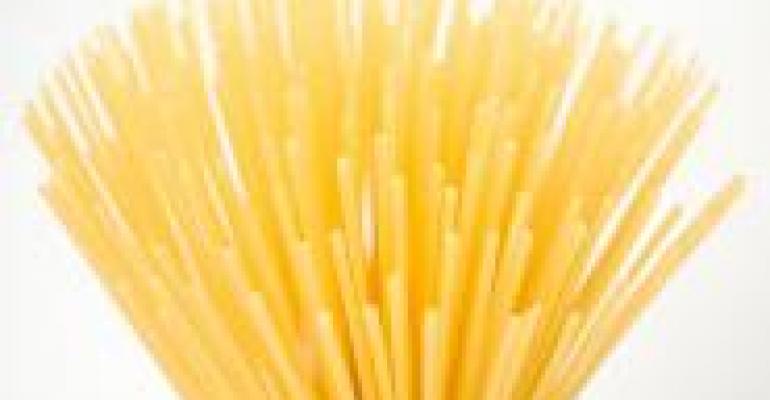 White starch has been pummeled pretty bad over the past few years. It started with the Atkins diet craze, and ended with pasta, potatoes and rice on the ropes — at least figuratively, as consumers were told to seek out whole grains, fiber and unprocessed foods.

Before Atkins, pasta had an 88% household penetration rate, an envious number. After Atkins, the number was down to 84%, where it has stubbornly remained.

Well, it’s once again a topical time for pasta — but in a good way, according to Peter Smith, president of the National Pasta Association, and CEO of Ebro North America, aka New World Pasta, the Spain-based conglomerate’s division over here.

“We see a shift occurring,” he tells us. “There’s less emphasis on weight loss and more on weight control.”

The difference is that weight loss (dieting) comes after the gain. Weight control, Smith points out, is an attitude that’s incorporated into one’s present lifestyle, and is more proactive and participatory in nature.

Look at wellness through those glasses, and you’ll see that pasta, rice and potatoes have a place on the table. It’s not any more fattening than any other carbohydrate. The secret is portion size. A serving of regular, plain pasta has 180 calories.

Indeed, pasta is still a huge staple in every cupboard. Americans consume six billion pounds a year, or 25% of the global total.

The “Pasta Fits” campaign that launched in April and culminates during October’s National Pasta Month, seeks to convey that critical loss vs. control message. The initiative takes advantage of the new My Plate dietary icon from the U.S. government, which depicts one-quarter of the plate reserved for grains, qualified with the statement: “Make at least half your grains whole grains.”

Smith said whole grain pasta has improved dramatically in taste and texture since it was introduced in the wake of the Atkins hurricane. Currently, 15% of category sales are in whole-grain varieties, and the numbers are growing exponentially every year.

Then there are value-added pastas such as Ronzoni’s Garden Delight, introduced last year, with strands of carrot-orange, spinach-green and tomato-red spaghetti, all fortified with vitamins appropriate to those vegetables. Future pasta products might offer plant sterols to control cholesterol, or similar ingredients that give the product the distinct feel of a functional food.

Starches might be down, but don’t count them out. They’re planning a big bounce back. They already have convenience and popularity on their side. Like beef, nuts and other once-maligned foods, consumers will now find ways to keep pasta on the table and still follow a healthy lifestyle.