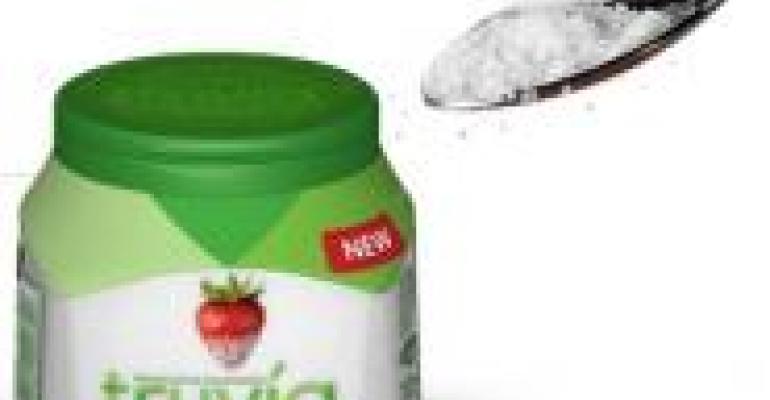 It’s been more than a year since stevia-based sweeteners hit the market in all sorts of beverages. As we head into the summer of ’10, let there be no doubt that Americans are really liking the stuff.

There are several companies leading the charge, including Cargill (TruVia), PureVia (Whole Earth Sweetener Co.) and Sweetleaf (Wisdom Natural Brands). If the latest numbers (supplied by stevia makers) are to be believed, then this plant is really roughing up the status quo.

For instance, we received an update this week from Cargill, makers of TruVia. For the last 16 weeks, it was listed as the No. 3 sugar substitute, surpassing Equal — an older sweetener made with aspartame — with a 7.6% dollar market share. The numbers are courtesy of the Nielsen Company, ending 3/20/10 in Food/Drug/Mass and Wal-Mart.

Perhaps a better picture emerges from this statistic: stevia sales have caused market share of the nation’s reigning sugar substitute, Splenda (sucralose), to drop below 50% during the same period. That’s a first.

Truvia officials also highlight that repeat purchases for their suite of products are at 31.4%. That’s not a shabby number in a quickly shifting category subject to the many whims of consumers and a flood of new products.

Mintel, the research firm, predicts that this kind of growth will continue — benefiting both stevia products and the entire alternative sweetener category. The firm forecasts that U.S. sales of both tabletop products (loose, packets and other forms) and products containing stevia to exceed $2 billion by the end of 2011. Growth in large part is coming from the rate of new product introductions. Roughly 221 new products containing the sweetener hit the supermarket in 2009, up from 179 the year before.

There’s every reason for stevia manufacturers to be crowing about their success going into the warm-weather months. Sixteen percent of respondents to a Mintel poll said they think stevia is safer than other artificial sweeteners; while 36% have tried it or would like to.

To bump up those numbers, watch for stevia to go value-added next by adding in fiber or super-nutrients like acai — things that Splenda is already doing. One fun item that that Sweetleaf brand has long marketed could take off as stevia gains trial and marketshare. The company sells liquid drops dressed up with fun flavors ranging from root beer and Valencia orange to vanilla crème and lemon drop. Anyone with a bottle of seltzer and one of those is good to go.