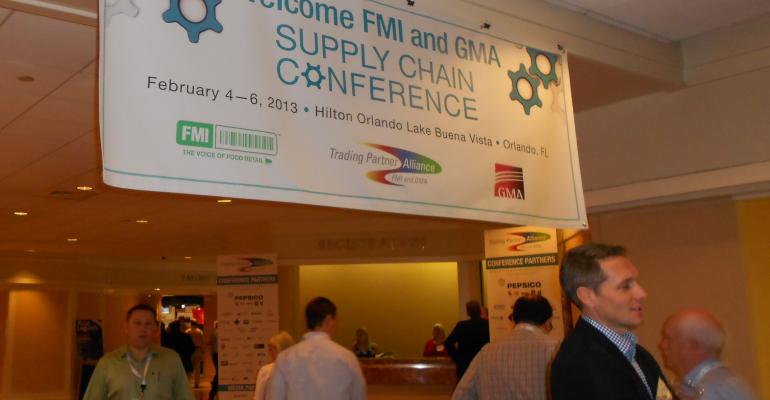 Supply Chain Conference: Logistics Gets Its Due

Even its most ardent defenders would acknowledge that the supply chain is not the sexiest part of the grocery business. Indeed supply chain and logistics – despite their essential role, which is to make sure that food actually makes it to the store shelf on time and intact – may tend to get taken for granted among merchandisers and other consumer-facing parts of the industry.

But here at the Supply Chain Conference, sponsored by the Food Marketing Institute and the Grocery Manufacturers Association, and taking place Tuesday and Wednesday, supply chain and logistics get their due.  For one thing, in a number of the educational sessions, CPG firms like PepsiCo, General Mills and ConAgra play up the important collaborative supply-chain initiatives they have formed with food retailers to cut tremendous amounts of cost from the distribution process.

The significant role of the supply chain was especially highlighted by two general session CEO speakers named Rick. Yesterday, Rick Blasgen, president and chief executive officer of the Council of Supply Chain Management Professionals, pointed out that logistics costs such as transportation and inventory not only represent a large chunk of the U.S. economy -- $1.3 trillion – but also serve as a barometer of economic health.

“Last year logistics costs increased about $80 billion, indicating demand is coming back,” Blasgen said. “A couple of years ago, at the height of the recession, there was a loss of $244 billion [in logistics costs].”  As a percentage of GDP, logistics costs have dropped as a result of the great strides in productivity made by companies over the past few decades, he added.

Today, Rick Rayford, president and CEO of Brookshire Grocery Co., Tyler, Texas, provided more reminders of the supply chain’s importance in his general session presentation. For example, companies with a sophisticated supply chain are 12 times more profitable than companies without one, he noted, adding. “Any glitch in the supply chain causes share value to torpedo.”

Rayford encouraged the supply chain executives in the audience to play an active role in their companies. “Let your voice be heard,” he said. “Your company needs you to come up with ways to make the supply chain more efficient.

“But don’t stop there,” he added. “Let your voice be heard in all aspects of your company. They will appreciate your advice because they know you’re trying to make your company better.”