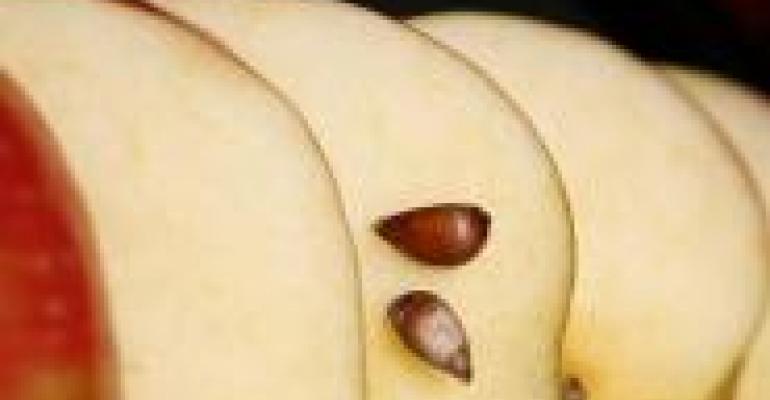 The apple is often used as a symbol of whole health; indeed, the apple has appeared a number of times on the cover of our print publication, SN Whole Health. It’s a colorful, universally recognized fruit that serves many purposes.

Perhaps that’s why there’s already concern being expressed about the idea of a GM apple. If the proposal becomes reality, the apple’s qualifications as a metaphor for wellness might face scrutiny in some quarters. The apple, called the “Arctic,” uses genetic technology that helps it retain its white flesh after cutting — ideal for packers who manufacture kids’ snacks and snack packs.

According to one story, the procedure has been licensed by a Canadian company. It marks the first time the process has been used on apples, the latest in the 100 or so petitions the agency had received since the first GMO crop was sanctioned back in 1992.

One of the largest organizations representing U.S. apple growers expressed some reservations in the story, saying “Genetically modified — that's a bad word in our industry.”

While genetic modification has been pretty much limited to toughening up food plants or bringing out desirable traits, the idea of direct consumption is moving closer to reality. The Food & Drug Administration is still considering the safety of the AquAdvantage salmon — an Atlantic salmon that’s been modified to grow faster and larger, using genes from the Pacific salmon and another fish.

Speaking of the Atlantic, the FDA and proteins, there’s a new report out from British authorities regarding the safety of meat and dairy products from cloned animals. The statement, coming from the Monty Python-esque “Advisory Committee on Novel Foods and Processes,” pretty much reaches the same conclusion publicized in 2008 by the U.S. food regulators.

The European Union is currently debating a 5-year ban on cloned food animals, though there's every indication that the meat and dairy the animals provide will soon find their way to store shelves. In Britain, it was recently disclosed that some offspring of a cloned cow had slipped through the cracks and gotten, unauthorized, into the food distribution system and likely consumed.

There are two threads running through these stories. One is that the issue of labeling (or at least, optional labeling) lags far behind the discussion about safety and public consumption; the second one is the general, overall support that governments around the world are showing for biotech in general. Consumers will be the ultimate judge of cloning and GMO’s success, but first shoppers have to know what’s in the package. Labeling would help solve that problem. For now, U.S. retailers, at least, are standing united against selling any protein that is genetically modified.

Given the industry’s reaction to the non-browning apples, it would seem regulators around the world remain in the minority.