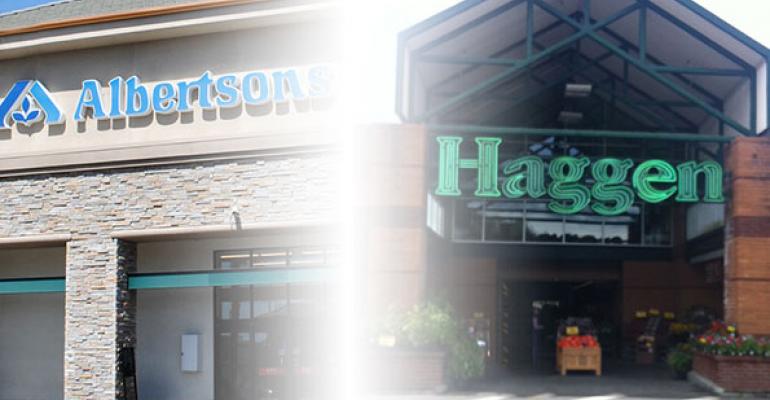 'They turned the Albertsons green'

While reading over a news release from Haggen heralding the beginning of Albertsons store conversions in the Northwest, I took note that one of the first stores to convert was a former Albertsons located in Wenatchee, Wash.

Wenatchee: I’d seen that name before. Though I’ve never visited, I know through the magic of social media that Wenatchee is the town where a college friend from years back has made a home. Wenatchee is a rural city in north-central Washington state which owing to acres of surrounding orchards calls itself the Apple Capital of the World (some other city apparently had already claimed “The Big Apple”). My friend works for the local power company and says he's the primary shopper for a family of three that includes at least one gluten-free eater. With the idea of seeing how the new brand has been received in its communities, I reached out for initial impressions. His comments follow.

“I am our primary grocery getter in my family. We were familiar with Haggen stores from the greater Seattle area — in fact, it’s one of my favorite places to grab reasonably priced, varied prepared foods. Kind of like Whole Foods, but with less attitude.

“I liked our Albertsons. In my opinion they had the best produce. But I'm not a brand loyal customer. I go to Costco for bulk; Walmart for convenience and low prices; Safeway for meats, and URM for gluten-free prices and selection. It all depends on my biggest dollar item where I go.

“I have been to the new Haggen twice. My wife has not. I described it as ‘they turned the Albertsons green’ — switched out the Albertsons blue and white branding, for Haggen green and white. Other than that, no change. The Haggen meat is more expensive, their brand non perishables may be less expensive, produce looks the same, meat counter, aisles, frozen, dairy and the deli — only the brand has changed.

“This Haggen is not what we have experienced in the greater Seattle area. It is Haggen-lite, or perhaps Haggen-spare. Guess us country bumpkins don't deserve the big city amenities.”

So there you have it. Haggen would likely tell my friend to wait and see, noting that its plans call for additional changes to roll in and the brand to take root in the months following the initial nameplate switches currently in motion. Given the variety of options — even in small-town Wenatchee — a new coat of paint won't do it alone.