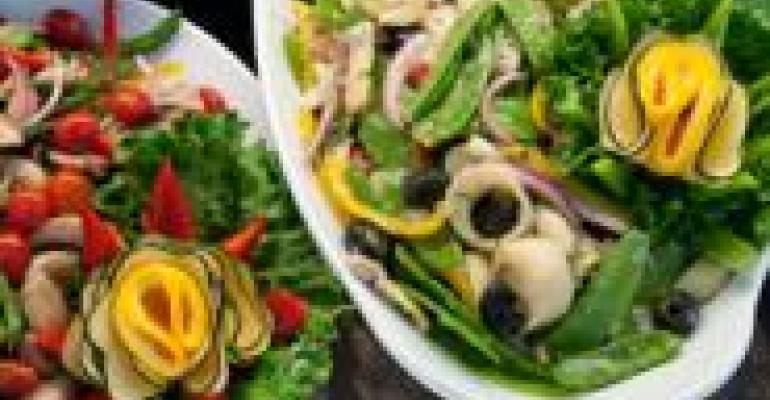 Since we'll be in Houston this weekend at IDDBA's Dairy-Deli-Bake 2010, billed as the show of shows, it seems like a good time to visit what some locals call Houston's grocery store of grocery stores. That would be Rice Epicurean Markets, the city's oldest family owned supermarket, one that has changed remarkably with the times. Quite unique, this five-unit independent, with it team of chefs turning out freshly prepared food everyday, and presenting it in so many interesting ways, it'd be hard to leave the place without trying some.

A few weeks ago, preparing to write a profile of the company's meal programs for the 6/7 issue of SN, I had a nice conversation with Douglas Dick, the company's vice president of food service operations. Douglas, who came to the company from food and beverage management in the hotel industry — Four Seasons and Westin — described, with obvious pride, how the company started out as a lone grocery store in an undeveloped part of town in 1937, and then grew up into a small chain of top-of-the-line gourmet specialty stores that also qualify as full-line supermarkets. I did say unique, didn't I?

Limiting expansion and keeping a pretty tight management structure has made a huge variety of products and good customer service managable, Douglas told me.

"The fact that we've kept ourselves to five units is a major factor in our success," he said.

While Rice Epicurean offers the newest and the trendiest in all departments as any specialty store would, it keeps its supermarket heritage evident.

As Douglas pointed out, a customer can get a nice plate of signature coriander-coffee beef tenderloin sliced right at The Carvery, and also pick up a case of Coke on sale.

The company's aim, as Houston's thermometers rise to unseemly heights, is to add plenty of cool, light salads that have their own cache, like linguini with summer succotash. Well, I could go on to describe some of those that particularly pique my taste buds, but instead, I decided to do some research -- enough to get you there so you can see for yourself what's on the menu this weekend.

Unfortunately, the closest Rice Epicurean to the convention hall and the Hilton is closed for major renovation. Two others though — on Westheimer and on San Felipe — are described by Douglas as "representative" and "within a reasonable distance." The closest definitely is the company's River Oaks store at 3745 Westheimer, near the corner of Weslayan. A nice woman at that store told me how to get there from the Hilton. Actually she said since getting out of downtown can be dicey, she'd recommend consulting the hotel's concierge on how to get on Highway 59. Then, head south on 59. Get off at the Weslayan exit about five miles down the road. Keep to the right, and turn right on Weslayan. In about a mile and a quarter, Wells Fargo Bank sits on your right. Turn into that parking lot. The bank and Rice Epicurean are in the same parking lot. In case of confusion, call the store's number: 713-623-4626.

Taxi-ing there is another option. Yellow Cab's fare from the Hilton to the store is $19, but the good news is that four people can ride in the cab for that one fare so it seems like a good enough deal if the fare is shared. And, I was assured the cabby accepts all major credit cards. No bartering though, even though I'm told Rice Epicurean's signataure all-white-meat chicken salad is worth a lot.