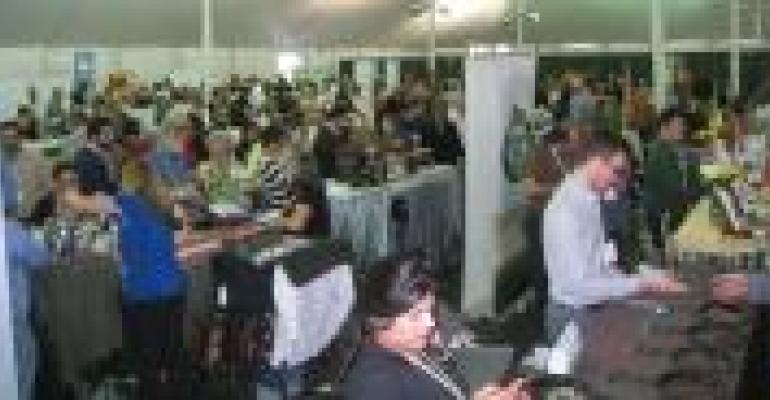 Under the Big Organic Top

It's part business and part social, depending on where you are under the giant white tent that stretches across much of the reserved parking area next to the Anaheim Convention Center. This is the site of the Fresh Ideas Organic Marketplace, held annually on the day before the main show opens at Expo West.

Inside the tent, nearly 100 tabletop displays offered all things organic — from chocolate, kombucha and produce, to certification, magazines and clothing. There were a number of products featuring cocoa nibs. They're basically crushed raw beans that have not yet been alkilined and therefore retain their natural flavor. The nibs are going into everything as they break through the natural/specialty retail barrier, including snack mixes, sweets and cereal.

Also featured under the tent were plenty of alternative sweeteners - cane sugar, agave, honey and a few more. Of course, this is all in response to the ongoing backlash to high fructose corn syrup (which was the subject of a CBS News report in which correspondent Michelle Miller noted, “High fructose corn syrup is just sugar with an image problem.”). A large number of beverages being served highlighted the fact that they used organic alternatives as an ingredient. Talk about sampling the chicken and the egg.

Speaking of beverages, that's what attendees found outside - the organic beer was especially popular as the shadows lengthened. And this was where we found many industry folks catching up with one another. If inside was all work, then outside was at least a little bit of play.