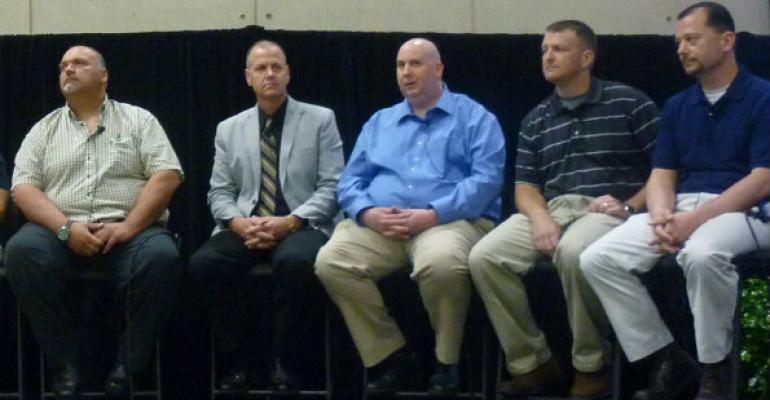 Today on the show floor, 10 of the 25 Retail Produce Manager Award winners participated in a panel discussion on what makes them and their stores successful. Though these produce managers came from stores from New York to California, all serving different demographics, all encountered similar challenges and changes in the produce department.

Most talked about how they are promoting local produce in their stores. “We're a local company and we like doing local business,” said Kevin Cazeaux, Rouses Markets, New Orleans.

Each retailer had a different definition of local. At Raley's Family of Fine Stores, local means anything grown within 50 miles of each individual store, said Ryan Acosta, Sacramento, Calif. “I've got one on board that grows just a mile from my store, two miles from my store,” he said. Raley's sometimes does its own GAP audits of the smallest farms to ensure food safety protocols are followed.

Food City/K-VA-T Stores requires all local growers to be USDA certified, said Frankie Thacker, Rogersville, Tenn. The stores display local produce with pictures of the farms and farmers to show customers where it came from.

Customers are interested in a product's back story no matter where it was grown, the produce managers said.

“Even if it's not locally grown, they want to know where it's from,” said Nicholas Olivieri, Pathmark, Bethpage, N.Y.

The speakers also agreed that customer service was key to the department's success.

“I call it a 3-foot rule. If a customer's within 3 feet, you've got to engage them,” said Cazeaux, Rouses. Recently, a customer asked about the difference between organic and local strawberries. An associate then led a taste test with organic, local and conventional for 20 customers who were in the area.

Another way to engage customers is through effective merchandising.

“The color is what drives the customer's eye. And they buy with their eyes,” said Rick Hogan, Hugo's Family Marketplace, Grand Forks, N.D.

Hogan sells 125 to 250 cored pineapples a week. The work is done at the store level. Though it's labor intensive, he said the effort pays off.

Value-added products are one of the biggest changes the produce managers had seen in the past 20 years. Olivieri, Pathmark, said fresh cut produce should be its own department within the department because of the amount of labor involved.

Another big change is the availability of produce year-round. In the 1980s, it was impossible to get berries in the winter, said Groendyke, King's. “Now you get citrus 12 months a year.”