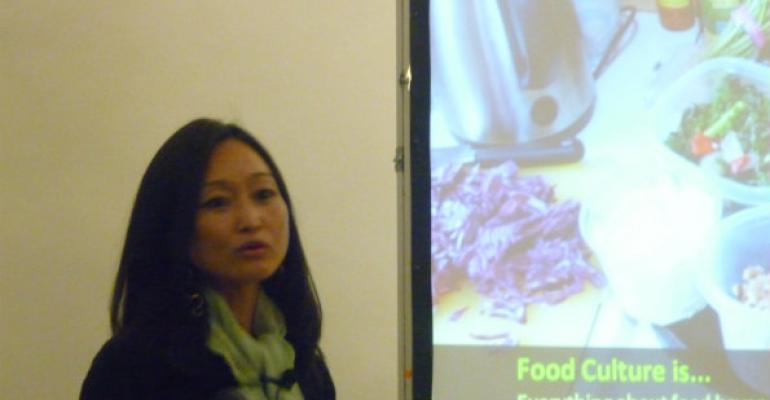 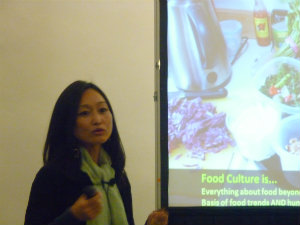 At yesterday's Retail-Foodservice Super Session, June Jo Lee of the Hartman Group explained that the way Americans think about food has changed dramatically in the last 50 years.

“Somewhere along the line we've shifted from being a cooking culture to an eating culture. It doesn't mean that we don't cook. It just means that cooking has become more of a choice. It's no longer just a chore,” said Lee.

Sometimes we choose not to cook at all. In fact, 77% of eating occasions include some form of prepared food, and 42% are entirely prepared food, according to research from Hartman. This takes into account meals from foodservice as well as retail.

“So from our perspective, consumers don't see a distinction between retail and foodservice. They see it all as a place to get food,” said Lee.

When consumers go grocery shopping, they aren't stocking the pantry anymore, Lee said. They buy food based on a certain meal, not the individual products.

At the same time, this new way of looking at food means there is more choice and consumers are more adventurous. “In an eating culture, we get to eat whatever we want. We're not bound by traditions,” said Lee.

Hartman research shows 48% of consumers tried something new or global on their last eating occasion. “Discovery is our new eating ethos,” said Lee.

Millennials especially are driving this trend. “They're just as likely to eat a bowl of Vietnamese pho as they are from McDonald's,” said Lee.

According to Lee, the ethnic food movement is not about center store and the sauce aisle. It's about produce, with dishes like bibimbap, a Korean rice and vegetable bowl.

Another opportunity for the retail produce department comes from easy to prepare salads and smoothies.

“The fact of the matter is, America has very low cooking skills. We don't really know how to cook complicated dishes. But we can toss a salad together or make a smoothie,” said Lee.

One retailer in particular seems to understand the “eating culture.”

“Consumers love Trader Joe's and they say it's because Trader Joe's helps me think differently about food. They're always just kind of ahead of that trend. They make it easy too,” said Lee.

Ultimately, the way Americans think about food today means retailers should not just be thinking about the traditional moms who cooked dinner every night for their families.

“Because we're an eating culture, everyone can participate. When it used to be just a cooking culture, most people just came to dinner and ate what was given. But now that we're all eaters, we all participate. We all want to have a say in what we're going to eat,” said Lee.