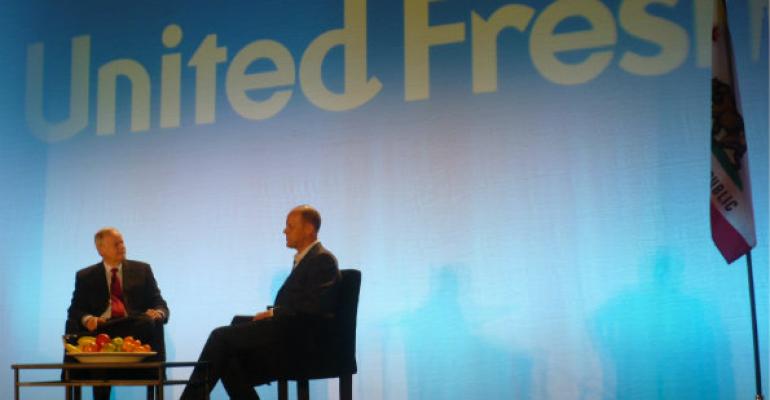 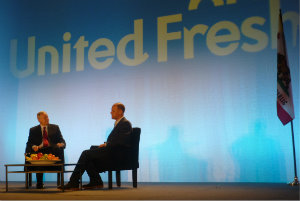 The opening general session breakfast was well attended, thanks to keynote remarks from Whole Foods Market Co-CEO Walter Robb. His talk was peppered with personal stories, such as when he was just  starting out and used to bypass highway weigh stations because his truck was overloaded with product.

Though Robb spoke about the healthcare crisis in this country at the beginning of his remarks and the need for a “food revolution,” he focused on five key areas of the greatest importance to the produce industry. The first was healthy eating education, which has become one of Whole Foods' core values and which the company accomplishes through teaching classes, doing cooking demonstrations and providing information to customers both in-store and online. “We've always been about bringing healthy food to the world but we've just doubled down with a core value that says this is what our company is all about, is to really help improve the health of the world,” said Robb.

Next, Robb discussed how the quality and taste of a product really is what drives sales. Tying into this is the growing importance of the story behind a product. “Customers continue to have an interest in where their product's grown and who's growing it,” said Robb. Whole Foods creates baseball cards of their growers to tell that story that can be scanned to bring the customer to a website.

Going along with that, traceability and transparency are also central to the success of the industry going forward. Robb said he thought the Produce Traceability Initiative was a good first step, but more needed to be done to make the supply chain fully transparent. “Food safety continues to be something that keeps me up at night. I'm sure it keeps you up at night. Because it's going to take one situation and it'll set us back. So we really want to get out in front of this,” said Robb.

The fourth focus area was emerging opportunities, including Whole Foods' work with opening a store in a Detroit food desert and working with a San Diego school district to make more locally grown product available in schools. Robb also mentioned a new program from Tulane Medical School to teach doctors how to cook as part of the medical curriculum and how fruits and vegetables could play into that.

Finally, Robb said the industry needs to do business to do good. “It's time for business to embrace a wider circle of responsibility” that's not just about driving profits but about “contributing to a better world.”

In terms of the future of Whole Foods, Robb revealed the retailer plans to roll out online ordering with store pick-up, or “click and collect,” in the next year or two. Next year, the company also plans to expand its “health immersions” ― six-day programs currently offered to employees ― to customers.

Robb left the United Fresh attendees with this uplifting message: “I can't help but think that you have nothing but golden fields ahead of you. There's just so much opportunity.”