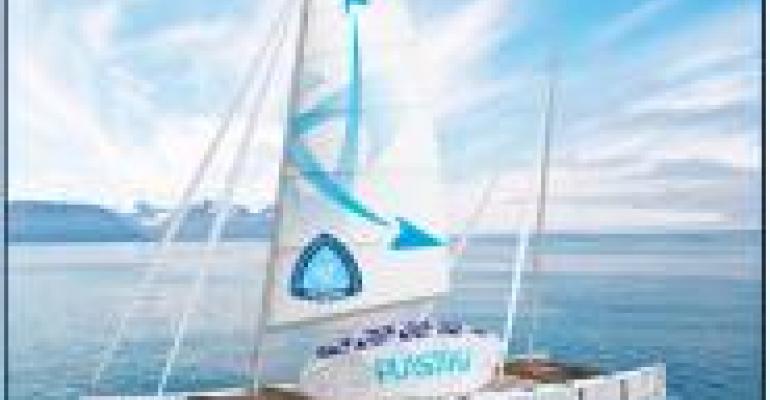 The Voyage of Plastiki

Supermarkets have shown they’re keen on using renewable materials to make and remake their stores. That’s a great step, but for many companies this is still a new frontier, and so it doesn’t hurt to look abroad for inspiration.

In this case, we're talking way abroad — out in the middle of the Pacific Ocean, somewhere near the Line Islands that sit halfway between California and Australia. That’s where Plastiki, a boat made from 12,500 recycled plastic bottles, is currently plying the waves.

If it sounds like the eco version of the movie “Up”, well, that’s because it is. Inspired by Kon-Tiki, the primitive boat that carried Thor Heyerdahl across the Pacific Ocean in 1947, Plastiki is on one of the longest eco missions in history. It set out from San Francisco in March, with hopes of reaching Sydney Harbor by July. That timeline may be a stretch, as the crew conceded in an interview with The New York Times (revelation: it’s a slow boat), but that doesn’t tarnish the overall goal of raising awareness about recycling, the need for sustainable energy, and all the stuff we throw away — much of which, in fact, can be found in the Eastern Garbage Patch, a watery landfill twice the size of Texas that Plastiki navigated through.

Determined to go against the spirit of waste that created “the gyre”, Plastiki is a marvel of renewable engineering. Besides the thousands of reclaimed plastic bottles, which had to be individually pressurized using dry ice, the boat includes a geodesic cabin made from recyclable plastic, masts made from reclaimed aluminum pipes, and an electrical system that harnesses wind, solar and human-generated (there are stationary bicycles) power. For a full diagram, click here.

Plastiki is the brainchild of Andrew de Rothschild, a millionaire banking heir cut from the Richard Branson mold. He and others are blogging about the experience on their website. That may not move you to go out and build a boat, but it could very well inspire some more down-to-earth deeds.