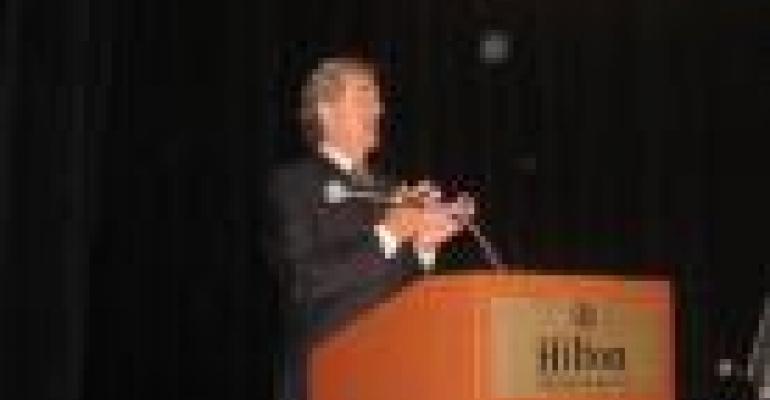 Waking Up the Crowd

The economy does not appear to have dampened attendance here at the FMI Energy & Store Development Conference in Minneapolis, where FMI says the attendance is around 600.

FMI's chairman Richard (Ric) Jurgens (at the podium, right), who is also chairman and chief executive officer of Hy-Vee, was the keynote speaker Monday morning. The stately, silver-maned Jurgens jump-started his 8 am audience with some challenging assertions. For example, he urged the energy and store design executives to hold their positions in high esteem. "You may think your job is thankless," he said. "But you play a critical role. Your job is to guide people like me." After all, he added, a store won't succeed if it's not in the right location or its energy costs are too high.

Jurgens also encouraged attendees to be contrarian -- "look reality in the eye and deny it." That is, since technology is rapidly rendering many standard ideas and practices obsolete, you shouldn't make long-term commitments with too much certitude, he advised. Everything should be questioned. For example, how big should stores be? Hy-Vee's ideal store is 85,000 square feet, but "we're exploring a smaller footprint," he said. Over the next five years, Hy-Vee's stores could range anywhere from 12,000 to 85,000 square feet.

Jurgens shied away from a discussion of global warming, but he did stress the importance of the environment to the supermarket industry. "It's important to people in their 20s and 30's, our customer of the future," he said. Hy-Vee is pursuing a range of environmental initiatives, from LEED stores to participation in the EPA's GreenChill refrigeration program.

Another GreenChill participant, Fresh & Easy Neighborhood Market, is represented here by Steve Hagen, its director of national procurement and engineering. Steve spoke at two sessions Monday, one on the GreenChill program and one on refrigeration case controllers. He also met with me so I could present him with Fresh & Easy's 2010 SN Sustainability Excellence Award in the chain category. (There's Steve with the award, right.) The two other winners are C&S Wholesale Grocers (wholesaler category) and First Alternative Natural Foods Co-op. Read all about these companies and their environmental initiatives in this week's SN or at www.supermarketnews.com.

GreenChill is a great program but the EPA is not devoting enough resources to it. Only one person -- the remarkable Keilly Witman, one of SN's Power 50 executives -- is managing it and that's not enough to support what has become a burgeoning program under Keilly's leadership. Steve Hagen agrees. "GreenChill has an opportunity to do much more," he told me. One example: the program could be expanded to include refrigeration contractors and equipment component manufacturers.