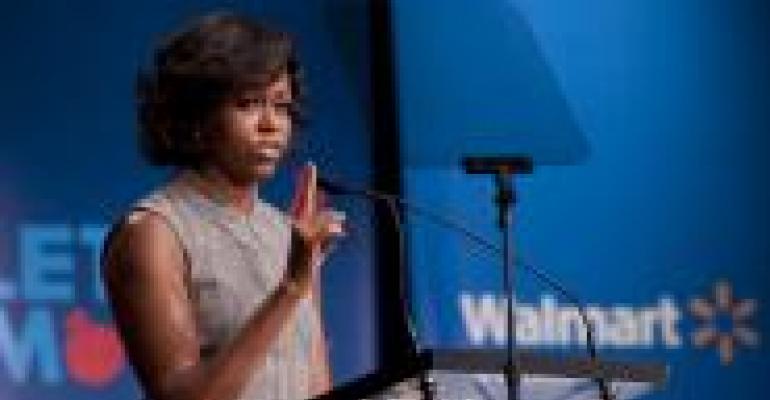 Given Wal-Mart’s plans to invest in sustainable agriculture, reduce its greenhouse gas emissions, and catalog the environmental impact of all of its products, you’d think the company would want to stop and take a breather.

But if the world’s largest retailer has shown us anything over the past five years, it’s that its ambitions are equal to its size. Today, Wal-Mart continued that run of form by announcing plans to reduce the amount of fat, sodium and sugar in the food it offers, and to make those items more affordable to shoppers.

Specifically, Wal-Mart plans to reduce sodium by 25% and added sugars by 10% in its national and Great Value brand products. It also hopes to develop front-of-package labels to identify those better-for-you items, and to move more stores into under served “food deserts”.

Wal-Mart made the announcement in Washington, and was joined by First Lady Michelle Obama, who helped structure the program as part of her interests in addressing healthy eating and childhood obesity. It’s the first time Mrs. Obama has come out in support of a single company, and a sign of just how much impact Wal-Mart can have in this area and in others. Indeed, sources told The New York Times that the company, with its enormous industry leverage, can have the same impact as legislation. For anyone who would question this, just look at the impact Wal-Mart has had on the size of laundry detergent bottles, which are now almost exclusively available in concentrated form.

That’s one example of a change the company has made that’s had a ripple effect through the industry, and there are others. Manufacturers throughout the supply chain are making products using fewer materials. Prices on items like CFL light bulbs have come down as a result of Wal-Mart selling them and pushing suppliers to produce them more efficiently.

It remains to be seen, however, how Wal-Mart will go about accomplishing this new set of incredibly complex tasks, and whether or not they’ll ultimately live up to their promises. People I’ve talked to around the industry are optimistic. But some have expressed concerns about initiatives like the Sustainability Index, which aggregates manufacturers’ environmental impact and will, Wal-Mart hopes, lead to a labeling system at some point down the road.

“I have a feeling it may collapse at some point under the weight of all that complexity,” said Marc Gunther, a contributing editor at Fortune magazine who writes about corporate sustainability.

There are also concerns over Wal-Mart leaning heavily on its suppliers to accomplish its goals, as well as whether its various initiatives are really counteracting the less-efficient, not-so-healthy side of the business that’s necessary to grow and stay competitive in the marketplace.

The ultimate trump card, still, may be that industry leverage — the influence that Wal-Mart has to make its suppliers, and thus the industry, change for the better. Whatever your feelings about Wal-Mart, its history and where this is all headed, you can’t deny that right now, companies are making changes for the better.

The question is: Can they keep improving?