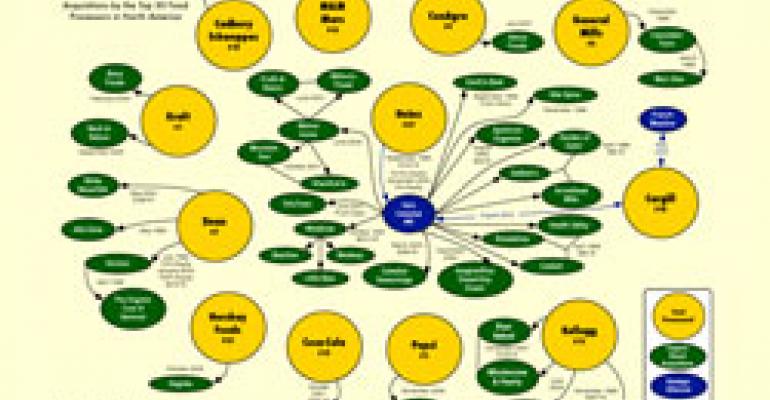 There probably aren’t that many people in the food industry who recognize the name Philip Howard. Many are familiar, however, with the colorful bubble graphics he creates every year that chart the structure of the organic industry. They’re easy-to-read guides to an ever-growing, ever-consolidating section of the supermarket — and they’re getting noticed by consumers.

Yesterday, in her Well blog for The New York Times, columnist Tara Parker-Pope wrote a post about Howard’s latest creation, an animated sequence showing acquisitions in the organic industry over time. Titled “When Big Business Eats Organic,” the piece discussed how large companies like General Mills and Hain Celestial own many beloved organic titles.

“These relationships aren’t very apparent,” Howard, an assistant professor of agriculture at Michigan State University, was quoted as saying.

Coverage like this is helping make the industry more transparent. Clorox’s buyout of Burt’s Bees last November appeared in all of the country’s major newspapers and zipped across the blogosphere. “I love BB products and am having a hard time in making a decision about if I will make future purchases of BB,” commented one consumer on a Chicago Tribune health blog. Coke’s recent 40% investment in Honest Tea generated similar buzz.

Companies like Clorox are responding to increasing consumer awareness about buyouts by launching sophisticated marketing campaigns. In February, Burt’s Bees started a “Natural Vs.” campaign, which sought to explain the term “natural” in the personal care category, and how Burt’s Bees upholds that standard.

Retailers are also responding, though not in the way you might think. A couple of manufacturers at last week’s Natural Products Expo West mentioned that supermarkets are looking for “new niche” products in the health and wellness category. They fear consumers might begin rejecting some products simply because they’ve been taken over by large corporations.

Of course, just because a company is big doesn’t mean they’ll exploit the smaller companies they acquire. In many cases, they can help that brand reach an audience it otherwise wouldn’t. Retailers should support the brands that are the ideal of authenticity, no matter who owns them.