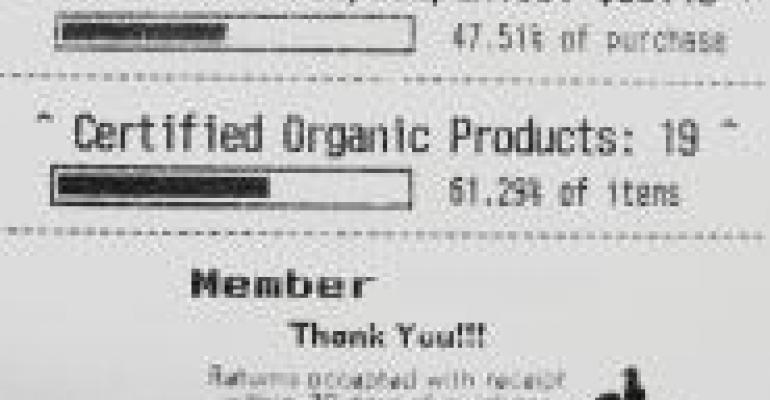 The Wedge in Minneapolis is one of the best-know single-store co-ops operating in the United States. The store has a teaching kitchen, and the operation today includes a wholesale distribution arm opened in 1999, and an on-site bakery added in 2001. Most recently, it purchased Gardens of Eagan, one of the oldest local certified organic farms serving the Twin Cities area, and began running the farm.

One would expect sustainability to be a big part of the Wedge’s mission, and it is, simply as a natural outgrowth of guiding principals established at its founding in 1974, and embellished over the years. The co-op's first-ever sustainability report shows that to be the case.

In the years since Sarbanes-Oxley has been in effect, a growing number of corporations demonstrate their transparency and integrity by publishing similar reports, but the scale of their activities sometimes makes them difficult to comprehend. Fleet-wide emmissions reductions? Carbon offsets at DCs? It’s hard to wrap your head around the data.

With their first-ever report focusing just on the retail operation, the Wedge takes sustainability down several notches to more human proportions. This we can better contemplate. And there are plenty of ideas to incorporate; any store manager — whether they’re running a chain unit or an independent — can get behind them. Here are some examples that jumped out at me.

LOCAL FOOD: The Wedge defines “local” as the five-state area of Wisconsin, Minnesota, Iowa, North Dakota, and South Dakota. The co-op reinforces the “Buy Local” message with a graphic on each receipt (pictured above) that shows the percentage of local products purchased.

“As a result, local sales are more prominent and now represent 34% of total sales,” the report states.

ENERGY: The Wedge has calculated that the store generates $36.02 in sales for every kilowatt hour (kWh) used. That also translates into 1.18 kWh used per customer, and $481 in sales generated for every dollar spent on electricity.

“As our store grew in size we installed solar panels on the roof to heat water, we installed a voltage regulator on the main electrical panel to minimize power surges on equipment, we use upright freezer cases with doors and recycle coolant to minimize refrigerant use and loss, and we have put in place a maintenance schedule that keeps all the equipment running at its most efficient,” the report states.

WASTE/RECYCLING: This is an area where any store can contribute to sustainability, and one where retailers are already active, in that solid waste hauling is among the most expensive back-end costs a store carries.

The Wedge’s waste stream is similar to any retailer’s: lots of food waste, trimmings and waxed and corrugated cardboard. Like other retailers we’ve profiled, the co-op’s food waste is collected and composted, with the resulting product used as fertilizer. Even leftover coffee filters and grounds used in the store are offered to customers as compost. For fiscal year 2010, the co-op’s waste-to-energy output was pegged at 235 tons, while its recycling output was 209 tons.

“The Wedge offers recycling opportunities throughout the store with recycling containers at every check stand, inside and outside the front doors, in every office, and staff breakroom,” the report stated. “They are well-marked with what materials can be recycled in individual containers. We also offer plastic bag collection for recycling.”

There is much more to the 25-page report, but the point I am trying to make is that reading it conveys a tremendous sense of well-being — and plain old smart business. It’s not lost on anyone that besides the inherent good in recycling and reducing energy consumption, taking sustainability seriously translates into very real savings.