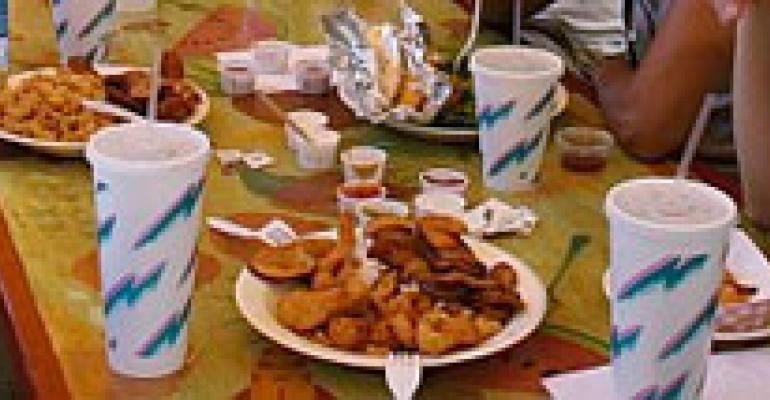 What I Ate on My Summer Vacation

I just returned from Cape Cod, where my family has vacationed for years. Economics played a part in the decision to go (gas prices, primarily), but there was also a sense of greenness about the whole venture that wasn't present in years past. There were more reusable shopping bags, fewer water bottles and, most surprisingly, a real interest in seeking out local food — whether corn from Mashpee or Wellfleet oysters.

But that's the problem. There was also taffy from Provincetown, fried clam strips from Falmouth (that's mine show below, waiting for another lemon wedge), and cranberry coffee cake from Hyannisport. We swam, we hiked, we biked and played .... and we ate like horses. Nothing was off limits. One fellow who usually prides himself on his dietary regimen made no apologies for the giant mason jar of cooking oil he ended up going though during the week we were up there.

This kind of behavior begs the question: Does going on vacation include all body parts? Everyone knows we take time off to clear our heads. But can your stomach leave behind the rigors of soy yogurt and omega 3 gel caps for a double scoop of peppermint stick ice cream pocked with streaky, chewy red candies?

We rented a house this year, so we were able to cook, at least, the big meal of the day. Because stores (including Roche Bros., Shaw's and a new Super Stop & Shop that positioned its wellness section up front with produce) were nearby, we were able to purchase some pretty healthful stuff like yogurt, lots of salad and even seafood. The ability to cook in and go shopping at a supermarket, instead of eating out all three meals, was a saving grace, and allowed us to maintain some semblance of our usual diets.

Did I tell you about the local bakery that makes only cupcakes?