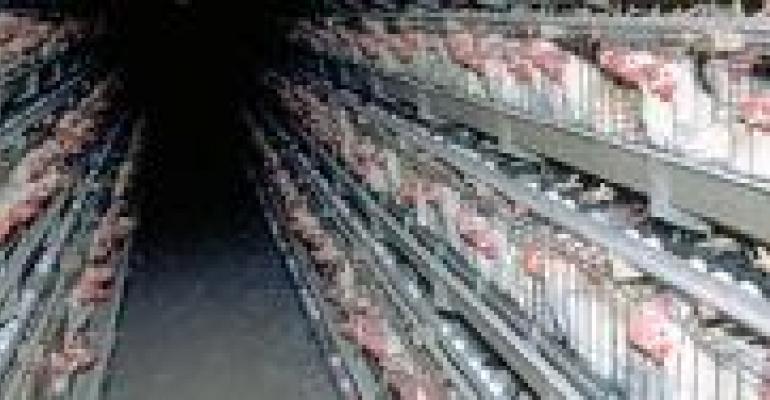 The passage of Proposition 2 by California voters this week leaves the state's commercial egg industry with some decisions to make. They have until 2015 to comply with provisions that will provide their egg-laying wards (as well as pigs and veal calves, also covered under the measure) with more room to stand, move around and extend their limbs. No more battery cages, like those show below, in a photo from the Humane Society of the United States, which endorsed the ballot question.

The cost to farmers varies depending on who you're talking to. An article in the Monterey Herald stated that the impact of the proposition will cost egg producers about $337 million. Some of those interviewed debated the idea of fighting the new rule in court, since renovating hen houses and buying extra property for them might not be feasible, especially right now in this economy. There's always real estate in neighboring states, too.

As laudable as the ideals are behind Prop 2, history teaches us that change is more persuasive when it rises from the populace (the most recent example being the election of Barack Obama). Yes, voters are consumers — but do consumers bring their vote to the store? Issues like animal welfare need to be pulled up directly from the consumer. You better believe the industry will change willingly if people start walking into supermarkets and demanding cage-free eggs, and them only.

True success lies at the refrigerated case — not the ballot box.