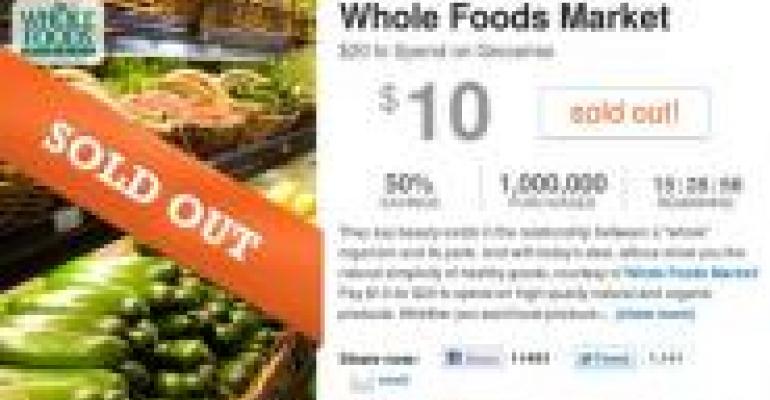 Whole Foods and the Art of the Deal

People went absolutely bananas this week for Whole Foods’ “pay $10 get $20” deal on LivingSocial. It was the fastest-selling deal ever for the popular flash sale site, with an incredible 115,000 sold per hour before reaching the one million limit in less than a day.

Aside from being a huge win for both companies, the deal’s success carries major implications. First, there’s what it says about Whole Foods — namely, that people are crazy about its products but still think they're a bit expensive. The company has worked hard to remake its “whole paycheck” image, and yet the deal’s ravenous sale rate suggests many consumers still consider shopping there a luxury. No doubt this was partly Whole Foods’ thinking in doing the sale, and good on ‘em for hammering away at the problem.

I’m sure every other supermarket in the industry is wondering what sort of demand they could spark by doing a similar deal. Flash sales are a new concept to grocers, and the potential is definitely there to generate excitement with new and existing customers. But I would argue that these sales should be used strategically in order to maximize their effect.

Flash sales shouldn’t be deployed the same way as coupons or price rollbacks. They’re like a sugar high for shoppers — quick and irresistible. Supermarkets, therefore, need to catch shoppers’ eyes with pinpointed deals on unique, timely products. I’m thinking pumpkin ale in October or locally grown strawberries in the summer.

More than just unique, flash sales should indicate what a retailer stands for. If you're a retailer that prides itself on a close connection with local farmers, offer deals on those products. If your pride and joy is the specialty cheese section, go with that. This way there will be something left even after the sugar high: an identity that people can latch on to. Massachusetts-based Big Y had a great example of this with its recent loyalty card deal through Groupon that offered a $40 seafood grill pack for $24.

It's a prime platform for healthy foods. Indeed, so many consumers feel priced out of the organic and natural section. And who hasn’t heard the truism that a head of broccoli costs more than a bag of chips? For all the talk retailers spout about supporting healthy lifestyles, they don't do enough to actually get the products in people's hands. With flash sales, there's an opportunity to do just that.