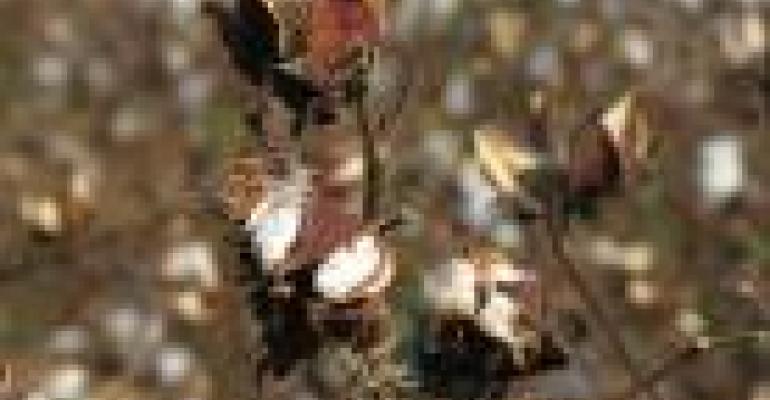 The World of Organic Cotton

I recently received an organic t-shirt that is so soft it already feels like I’ve had it for years. It’s my new favorite Sunday-morning-with-coffee-and-newspaper uniform, and has quickly assumed the prime spot atop the stack of t-shirts I keep (in this business, we get a lot, believe me, so competition is tough).

The qualities of the shirt got me thinking about organic cotton in general, and where we stand as a country and marketplace for this staple. Some natural/organic retailers like Whole Foods Market stock a selection of organic shirts or yoga wear, and even Wal-Mart has offered some organic cotton clothing as a show of support for the industry.

The fifth annual Organic Farm and Fiber report from Textile Exchange shows that not even a faltering economy is stopping demand for organic cotton. Production of organic cotton rose 15% — from 210 metric tons (MT) in 2008‐09 to 241 MT in 2009‐2010. That means that organic cotton now represents 1.1% of global cotton production, according to the organization.

“Global organic cotton has witnessed a veritable explosion (539% increase) in production in the last five years since 2005‐06, when only 37,000 MT were produced,” the authors wrote.

India, Syria and Turkey, respectively, are listed as the top three growers around the world, with India alone responsible for producing just over 80% of the crop. The United States comes in fifth (after China), harvesting 2,800 MT, or 1.2% of the global total, from three states: California, New Mexico and Texas.

Supply and demand issues are playing out against a wildly fluctuating commodity market. Organic price premiums, which are set a certain percentage above conventional cotton, have become very unreliable since the price of regular cotton has skyrocketed above even the organic premium.

The price problem is compounded by costs associated with organic certification and traceability protocols. The latter requires communication and coordination between multiple stakeholders, from grower to manufacturer to retailer. With prices so high, the incentive to invest in becoming an organic operation just doesn’t make sense. According to the report, one of the big threats is the lure of GM cotton, which appeals to farmers for a number of economic reasons.

“Companies in the organic textile industry must remain vigilant about risks such as contamination with non-organic fiber,” wrote Mark Prose, program manager for Control Union Certification, a certifying agent. “For this reason certification is an important element in making sure that consumers retain confidence in the concept of buying organic fiber.”

As organic cotton hits the big time, the need to maintain and increase volume on a global scale will place pressure on many parts of the supply chain. Valuable lessons can be taken from the organic food industry, which went through similar growing pains several years back (some would say it continues to). The main objective must be to protect current growers and to invest in processes that codify the source, handling and manufacture of organic cotton.

Take it from me. The world would be much more comfortable if we wore organic t-shirts.