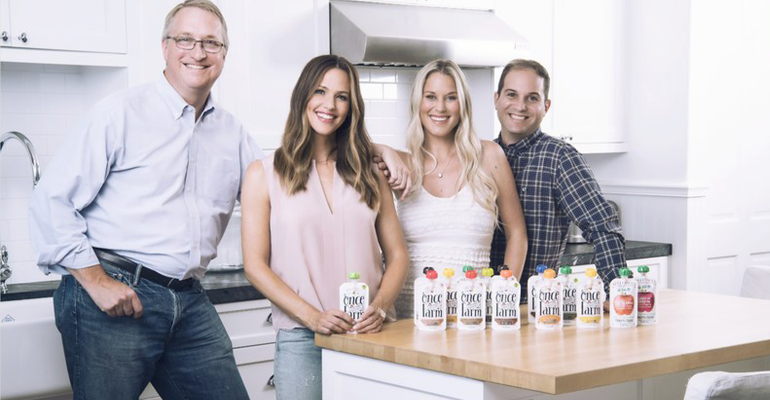 Actress Jennifer Garner is on a mission to make healthful and organic food available to all children.

It’s a mission she has taken on as co-founder and chief brand officer for Once Upon a Farm, an organic family food company that makes a sustainably sourced line of cold-pressed baby foods and applesauce.

The retail brand also launched a new line of organic smoothies, she told an audience last week at the Natural Products Expo West in Anaheim, Calif.

It’s the next step in what Garner hopes will grow to become a broader offering of food that moms can feel good about passing to their kids in the back seat of the car on the way to soccer practice or ballet, she said.

But if Garner has her way, Once Upon a Farm’s more healthful offerings will also be available to lower income mothers receiving assistance through programs like WIC, which provides federal grants to states for supplemental foods and nutrition education to women who are pregnant or nursing and kids under 5.

“We’re disrupting the category,” Garner said. “We can’t just talk about feeding the top 10% of kids, or 50% of kids. We have to talk about how to give that nutrition to the bottom half.”

Joining Garner in the effort as CEO of Once Upon a Farm is John Foraker, the former president and CEO of the organic food brand Annie’s, which was acquired by General Mills in 2014 for about $820 million.

Foraker, who joined Garner on stage at the Expo, said baby food is a $1.6 billion business in the U.S., but mostly shelf-stable. Once Upon a Farm’s line includes fresh, preservative-free, “farm-to-highchair” refrigerated organic baby food available in the dairy section.

“Millennial consumers and moms want to feed their kids better food, but it’s not available. So how can we be part of this change,” he said. “We want to build a leading kids nutrition brand. We think we have an opportunity to increase the quality and healthfulness of food for all kids in the U.S.”

Garner said her passion for better-quality food grew after she became a mother. She has three children with ex-husband Ben Affleck.

“When your kids are born, everything in your brain shifts,” she said. “When I was first pregnant with my daughter, I thought I’d never stop working and that she’d be raised in a trailer.”

But when she opened that first jar of baby food, she said, “Ack, no. I’d never feed this to a human.”

Now the actress said she grows much of her own family’s food at their home in Santa Monica. She raises chickens and bees. “It’s like a living science experiment,” she said.

Garner’s mother grew up on a farm in Oklahoma and often told stories about the homegrown fruits and vegetables there. Now that family farm is in her care, and Garner is in the process of converting it to an organic operation that will eventually be part of Once Upon a Farm’s supply chain.

“We’re going to grow kale, blueberries and persimmons,” she said. “We’ll be feeding babies persimmons before you know it.”

Foraker said the company will grow by supporting farmer-direct sourcing, with an emphasis on suppliers that practice regenerative agriculture, or holistic farming practices that promote soil health and minimize the release of carbon into the atmosphere.

Fundamentally, it will be up to business leaders to bring about change in the food world, he said.

“Business has to be a huge part of the solution to the world’s problems,” he said. “Government isn’t going to take care of it on their own. They can’t.

“I encourage people to be vocal. Don’t hold back on a political opinion. I want to hear more people speak up,” Foraker told the crowd.

Much has changed from Annie’s early days as an organic product in the late 1990s, when “people thought organic belonged in the mop closet,” said Foraker.

Now, he said, “We can influence the entire food industry. With 82,000 people coming to this show, we are driving the food industry right now.”