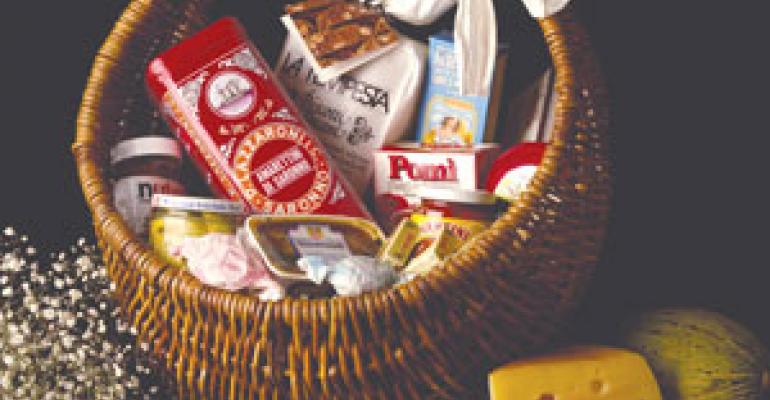 Gift baskets aren't just for the holidays anymore. Food retailers are giving companies like Harry and David more competition as many turn gift baskets from a seasonal side business into a year-round profit center. The bundled offerings enable retailers to present national-brand, private-label, locally grown and gourmet items in a beautiful package that carries one of the highest retails in the store.

Food retailers are giving companies like Harry and David more competition as many turn gift baskets from a seasonal side business into a year-round profit center.

The bundled offerings enable retailers to present national-brand, private-label, locally grown and gourmet items in a beautiful package that carries one of the highest retails in the store.

Today, food retailers are selling $100, $200 and — at certain upscale stores — up to $1,000 baskets holding expensive bottles of wine and high-end specialty chocolate.

By offering gift baskets, Buehler's is tapping into a growing national trend. That's because gift baskets and other “consumables” were the fastest-growing gift category for the 2006 holiday season, according to Unity Marketing, a Stevens, Pa., consulting firm.

People favor gift baskets and other consumables like wine and chocolate over other popular “giftables” categories, such as flowers or plants.

Unity attributes the rise to the fact that consumables are highly experiential, meaning they're more than just a token of affection; they deliver an experience.

The holidays are no doubt the biggest selling period for baskets. Buehler's, for instance, sold about 3,500 baskets last December, a 3% increase in sales from the 2005 winter holiday season.

Strong year-round sales, though, are becoming increasingly common. A big reason for this is that retailers that once focused primarily on fruit are now incorporating food into their assortments.

Fearon said upscale food and beverages are common additions to themed baskets offered not just for Christmas, but also during other special times of the year, including Valentine's Day, Mother's Day and even the Super Bowl.

“The innovative grocers are seeing the profitability of themed baskets,” said Fearon, citing that it's not uncommon to charge upwards of $100 for such assortments.

Fearon attributes the popularity of baskets to the fact that they are value-added. Not only can the recipient enjoy the food or fruit inside, the basket serves as a permanent keepsake.

“The container has value in it after everything inside it is gone,” he said.

A TASTE OF HOME

Some of OIC's most popular baskets are those with a local or regional theme. One of its best sellers is shaped like the state of Texas.

Retailers agree that baskets with a local theme do particularly well.

“People may have once lived here and want to get something that reminds them of here,” according to Patty Manzano, floral director for Dorothy Lane's Springboro, Ohio, store. “They have a lot of pride in Ohio.”

The Springboro store makes about 30 baskets a week. Baskets range from about $30 to several hundred dollars. Customers can browse the store and pick and choose which items they want to be included.

Dorothy Lane ships its baskets all over the country and, at times, internationally.

While all of Dorothy Lane's baskets are produced at the store level, the gift basket business is becoming so large that many retailers are sourcing out the job to their wholesalers. By doing so, they save time and labor, said Fearon.

“Supermarkets are busy. They don't have the labor to handle it on their own, so they give the job to their wholesalers,” he said.

Buehler's, however, is determined to keep the business in-house. Each of its 13 stores fills baskets at the store level, according to Tomassetti.

“We're one of the few [chains] that still makes them on our own,” he said.

The advantage of this is that Buehler's gift baskets are freshly made and truly exclusive to its stores, said Tomassetti.

“I want ours to be different than the ones at Giant Eagle,” he said.

Buehler's started dabbling with fruit baskets 25 years ago. Today, the business has grown to include baskets with nuts, gourmet pasta, mustard, olive oil, Buehler's own Scenic River-brand coffee candy and other packaged foods.

Customers are free to browse the store and choose whatever items they want to include in the assortment.

“We customize baskets right at the store,” he said.

Buehler's uses about two people to assemble the gift baskets for most of the year. Additional help is hired for the holidays.

Until three years ago, the retailer prepackaged all baskets at its central warehouse, and then shipped them to its individual stores. Buehler's changed that procedure because it found that it was more productive to make the baskets at the store level.

Most of the gift basket business is done during the holidays, but Buehler's has been pleased with year-round sales.

While some shoppers want a simple $10 basket, plenty more are not hesitant to spend $100 or more.

“Over the last few years, the trend has been high-end baskets,” Tomassetti said.

“This gift has everything a hungry student likes,” Stew Leonard's writes in promotional materials. “So send them a smile and let them know you miss them already with our Student Care Package.”

The retailer's single store sells about 150 gift baskets a week, and upwards of 3,000 during the holidays.

“It's a great gift to give to someone you don't know or for someone who has everything,” she said. “And it's more personal than a gift card.”

West Point employs one full-time and three part-time basket fillers, several of whom have more than 30 years' experience building baskets. Additional help is hired for the holidays.

“Our basket makers love doing what they do,” Conlon said. “They come to work all the time with new basket ideas.”

Conlon said West Point has an edge over catalog retailers because it allows customers to shop its stores and choose whatever they want.

“Catalogs are restrictive, in that people can only order certain baskets,” she said. “That's not the case here.”