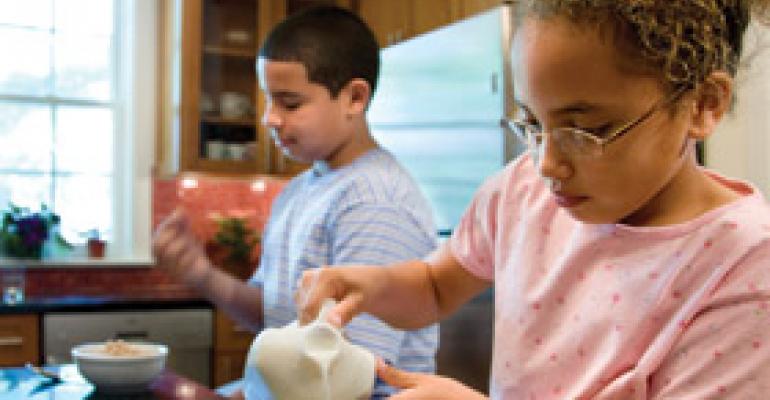 Cereals packed with simple, healthful ingredients like whole grains, fiber, calcium and omega-3s are pouring onto supermarket shelves, and consumers are scooping them up.

Cereals packed with simple, healthful ingredients like whole grains, fiber, calcium and omega-3s are pouring onto supermarket shelves, and consumers are scooping them up.

Between concerns over childhood obesity and heightened awareness of the value of high fiber, breakfast's sugar levels are dropping, consumers' waistlines are shrinking and good-for-you breakfast food sales are expanding.

At Brookshire Brothers, based in Lufkin, Texas, healthy cereals have also been a fast-growth category, with a focus on whole grain and high-fiber formulations, said Danny Cassity, advertising director for the chain. He attributes some of that popularity to manufacturers moving toward sugar reductions and adding whole grains.

Since committing to reduce the sugar content of all Big G cereals advertised to children to single-digit levels of grams of sugar per-serving one year ago, the company has made significant progress.

Meanwhile, in the past three years, Kellogg has reformulated over 100 products to reduce sugar and sodium, remove trans fat and add fiber.

“In 2010, Kellogg fulfilled its commitment to add fiber to the majority of our cereals to help the more than 90% of children and adults who don't get enough fiber in their diets,” said Yuvraj Arora, senior director, U.S. morning foods brand marketing for Kellogg.

New introductions to the category are following suit, according to analysts and retailers.

The percentage of new cereals in the U.S. claiming to contain whole grains in 2010 was 52% (a total of 197 new cereals, both hot and ready-to-eat) — a 5% increase over the preceding year, according to Datamonitor, London. Meanwhile, 33% claimed to contain high fiber. This percentage was flat against the previous year, but shows growth, given a greater overall number of cereal introductions in 2010 (377) over 2009 (284).

“Manufacturers are responding to America's return to a slower lifestyle,” said Mark Whalley, an analyst in Datamonitor's Consumer Business Unit. “People want to be able to take 30 minutes in the morning to sit down with their family and have a meal — and eating cereals with healthy ingredients ties into that.”

Food trends are going back to basics, agreed Michelle Mix, nutrition coordinator for Hannaford Supermarkets, based in Scarborough, Maine, where healthy brands such as Kashi and Barbara's Bakery are being given extended shelf space and endcaps.

“Manufacturers are using simpler ingredients because the public has demanded less processing. And now with the First Lady's childhood obesity initiative, the country — and food companies — are doing their best to meet demands for healthy options.”

Consumers no longer accept that something can't be done, said Amy McLeod, director of food and nutrition services at Brookshire Brothers.

“So many studies on the harmful effects of artificial flavors and too much corn syrup have come to light that consumers are demanding these healthier products, and manufacturers are responding.”

“Popular television shows like ‘Dr. Oz’ and ‘The Doctors’ introduce health concepts that consumers would not know so much about otherwise.”

Whole grains and fiber continue to top the list of ingredients consumers are looking for, said Mix. However, as cereal quality continues to increase, calcium, omega-3s and antioxidants in the form of nutrient-rich berries will be the next important components, she says.

THE NEXT BIG INGREDIENTS

The percentage of new cereals in the United States claiming to contain omega-3s in 2010 was 19% (a total of 72 new cereals) — a 10% increase over the preceding year, according to Datamonitor. “Consumers want to find more ways to get omega-3 fats in their diet for a number of health reasons, with heart health being the top reason,” said Hy-Vee's Marshall.

Twenty-nine percent of new cereals in 2010 claim to be high in vitamins (a total of 111 new cereals), an 11% increase over 2009; and 10% claim to contain antioxidants (a total of 39 new cereals), a 2% increase over 2009, according to Datamonitor. With this addition of healthful ingredients, and the economy's slow recovery, the public's perception of value is shifting, said Datamonitor's Whalley. “American consumers want the best for their family and for their dollar, so people are willing to spend a little more money as long as they are getting a quality product in return.”

Brookshire Brothers' McLeod has seen the same change in her customers. “People find value in great ingredients and are willing to cut corners elsewhere, so if you are going to pay $4.50 for a box of cereal, it has to be good for you and taste good enough that your kids are willing to eat it.”

One way to help consumers face this challenge is to give them the opportunity to taste new products, and, as Brookshire Brothers does, feature a special video segment on the store website pointing out foods that taste great and are great for you. For instance, in a recent “Approved by Amy” segment, McLeod praised Kellogg's Fiber Plus Cinnamon Oat Crunch. “Sometimes customers buy a new healthy product and regret it if they didn't taste it first.”

Taste is a big reason why companies like General Mills are rolling out new formulations slowly over a number of years. “To ensure the cereals continue to taste great, reductions [in sugar] will continue in a series of smaller steps,” said Foster. “We are committed to reaching single-digit [grams of sugar per serving] levels while maintaining the great taste of Big G cereals consumers love.”

Hannaford is helping consumers make their cereal choices by running promotions such as sampling, highlighting items in its weekly flier, offering store-generated coupons at checkout and running an in-store nutrition program, complete with store tours that regularly highlight Kashi products, as Kashi is one of the program sponsors, said Mix.

Brookshire Brothers is currently testing some of its markets with new shelf arrangements.

“We're testing consumer receptiveness to healthy items grouped together by type rather than by manufacturer,” said Cassity. “Many retailers have shown movements towards grouping healthy items together.”

For Hy-Vee, ending consumer cereal confusion is about offering the NuVal score of each item. NuVal is the nutritional rating system that assigns food a score from one to 100. The higher the score, the more nutritious the product.

In Hy-Vee stores, an item's NuVal score can be found on its price tag at the shelf's edge.

“When Hy-Vee runs an advertisement, we show the NuVal score of each item on the ad,” said Marshall.

This can be especially helpful in a category with as many choices as cereal, and healthy cereal in particular.

“I see a few new healthful products almost every time I do a store tour,” said Brookshire's McLeod. “It all comes down to consumers preparing to shop and making the right decisions for their family in-store, and hopefully we help them do that.”