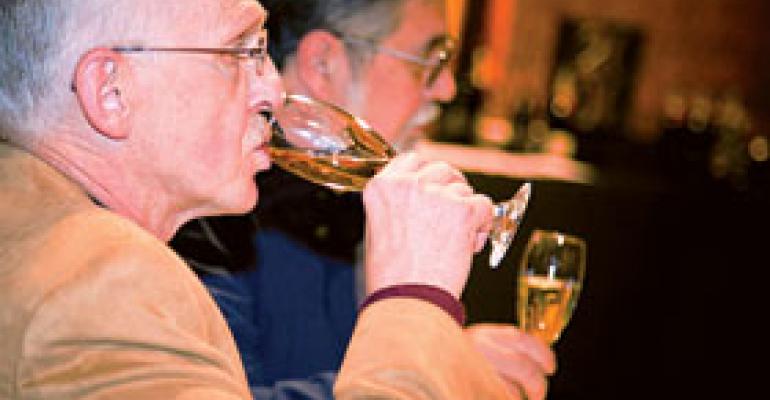 Break Out the Bubbly

Nothing makes a celebration like a bottle of champagne. The flying cork, geyser of bubbly and equally dramatic price tag scream, “Special, not for every day!”

But consumers aren't letting cost constraints kill their buzz. Many are trading top-shelf bubbly for wines that pack the same effervescent punch, but at a price that allows for more experimentation.

Take for instance sparkling wines made in accordance with the méthode champenoise, but outside of the famed Champagne region. Bottles priced in the $15 to $20 range are making a name for themselves at Jungle Jim's International Market, Fairfield, Ohio, where consumers are trading up from the $10 bottles of carbonated wine they opted for last year.

Popular brands like Jean-Louis Denois Brut Chardonnay for $18.99 and Gerard Bertrand Crémant de Limoux at $14.99 come from southern France and taste like the real thing, but sell for less than half the price of champagne starting at $39.

David Schmerr, wine and beer director of the single-unit operator, feels confident endorsing these brands since they remind him of one of his favorite wines.

“Both are excellent values and taste like true French champagne,” he said.

Shoppers elsewhere are uncorking a similar secret, evidenced by the popularity of sparkling wines priced under $25.

Fueling the trend is exposure to a wider array of sparklers in restaurants, where sommeliers see the beauty in all things bubbly.

While it's true that champagne remains the gold standard, a diversity of lower-priced styles are taking diners beyond the traditional toast.

There are carbonated wines perfect for the start of dinner as an aperitif, types that pair well with the main dish, and sweet styles that complement dessert, Belinda Chang, wine director at The Modern restaurant in New York City's Museum of Modern Art, told SN.

“Sparkling is one of the most versatile styles of wine there is,” she said.

With almost every serious winemaking region in the world producing méthode champenoise wine, there is a plethora of champagne substitutes to choose from.

Chang recommends Crémant d'Alsace from the Alsace region in France or sparkling styles from Franciacorta in Lombardy, Italy. There is also prosecco, produced primarily in Italy's Veneto region, cava from Spain and sekt from Austria and Germany. Then there are obscure options, produced in limited quantities for exclusive distribution.

Take for instance De Chanceny Crémant de Loire, a sparkling wine with notes of peaches and pears produced specially for Whole Foods Market by a group of 30 families in France's Loire Valley. The wine tastes so much like champagne that it heads up Whole Foods' list of Top 10 Holiday Wines, designated as such since they're “top notch wines at easy-to-swallow prices.” A bottle is less than $15.

“This sparkler can easily be compared to Champagne costing two to three times the price,” said Whole Foods in promotional materials.

Rather than simply enjoy the wine while ringing in the new year, Whole Foods recommends that De Chanceny Crémant de Loire help kick-start a meal or even finish one. Baked Apple and Brie Canapés is one suggested accompaniment, but a Fall Fruit Upside-Down Cake also works well, said the retailer.

Whole Foods has dreamed up other opportunities for the wine. As part of a strategy to help De Chanceny Crémant de Loire “go viral,” it was the first-ever to be “Twitter-tasted” by Whole Foods' wine experts earlier this month. The grocery chain's national wine buyers, Geoff Ryan and Doug Bell, hosted the virtual tasting that included five other Top 10 Holiday Wines and suggested pairings.

Shoppers were encouraged to pick up a bottle or two before the event and print a tasting sheet so they could taste and tweet along with the experts from home.

Participants joined the TweetChat room: tweetchat.com/room/wfmwine, and can follow the wine buyers and other participants at #WFMWine and #WFMWine, moving forward.

“From Cab Franc, Chenin Blanc and Chardonnay vines over 30 years old. A rich, ripe, creamy and festive bubbly,” tweeted one of the hosts.

After trying the bubbly with the suggested pairing, one follower tweeted, “Great pairing of the Brie with the De Chanceny — downplays the bubbles and brings out the pear notes so nicely.” Another noted, “De [Chanceny] Cremant de Loire is amazingly bubbly and tastes amazing with Brie and pita chips!”

By tapping into a social medium that's popular with the 20-something set, Whole Foods is introducing sparkling wine to a next generation of consumers who've recently come of legal drinking age. Whereas in the past their alcoholic beverage allegiance was limited to beer, today's young adults have developed a more sophisticated palate — one that's open to trying craft brews, specialty spirits and different types of wine, said Doug Goodwin, vice president of client insights for beer, wine and spirits at SymphonyIRI Group.

“Introducing them to the sparkling wine segment is a very strong play in my mind,” Goodwin said.

But consumers in their 20s aren't the only ones who stand to learn a thing or two about sparkling wine. Most Americans associate carbonation with white varieties, but bubbly reds can add flair to holiday festivities too.

Chang recommends pairing sparkling pinot noir or shiraz with the main attraction of a holiday meal, whether it be turkey, roast duck or roast beef. Doing so gives diners the rich flavors of a red wine with a light effervescence allowing room for dessert.

“When you have sparkling wine you can eat more pie,” said Chang.

Ten sparkling wines will be featured during the two-hour event. Schmerr is expecting around 60 people. Reflecting current trends, its theme focuses on getting the most bang for your buck. Tickets are $30.

“This year's tasting will pit the best in the wine world against each other to see who is the most exciting, the most improved and the most for your money,” states Jungle Jim's promotional materials.

Schmerr will get the party started with a cava from Spain that costs about $10 per bottle and work his way up to the grand finale: a taste of true French champagne.

“Sometimes I include Dom Pérignon, which is $170 a bottle,” he said.

Featured wines are grouped together in Jungle Jim's wine section so participants can easily find them, immediately after the event and through the month of December. Day of sales of featured wine range from $5,000 to $10,000.

Schmerr hopes that a bounty of budget bubbly will help shoppers see the versatility of sparkling wine.

“They're for any occasion, not just a special occasion,” he said.