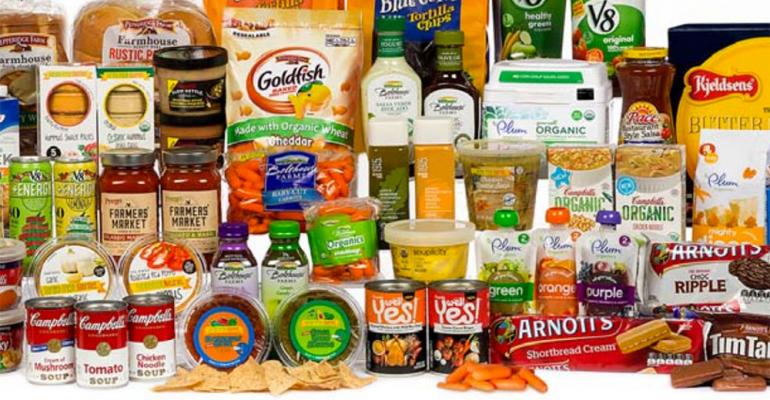 Campbell’s to GMA: No Soup for You

“One of the problems with having principles is you have to live by them.”

So said Campbell’s Soup CEO Denise Morrison during the company’s annual investor day event this week, before revealing that living by those principles means it would withdraw its membership from the Grocery Manufacturers Association (GMA) at the end of the calendar year. According to Morrison, the GMA, which represents the interests of giant CPG companies, no longer represents the interests of Campbell’s, a giant CPG company.

“This is not a financial decision,” Morrison said. “It’s a decision driven by our purpose and our principles.”

The pending exit underscores the challenges that food manufacturers — particularly packaged food brands that grew up and prospered with the supermarket and whose brand equity remains closely associated with them — are facing in a world where consumers are rejecting processed food and old-school brands, and are embracing new ways to eat and to buy. It acknowledges the paradigm shift whereby consumers, not brands, are in control today, and so brands hoping to win their trust need to disassociate with the equity of their peers.

Morrison’s remarks came in the context of describing Campbell’s ongoing effort to refashion itself behind its stated purpose — “Real Food that Matters for Life’s Moments” — saying the company would support that through greater transparency and sustainability, and continuing to diversify its portfolio in fresh food and health. These initiatives are placing Campbell’s where customers and the food business is going, she noted. Since 2011, Campbell’s has sold brands and exited categories showing little potential for growth, and acquired new brands like Plum Organics, Bolthouse Farms, Garden Fresh Gourmet and this month’s announced deal for Pacific Foods. It’s removing all artificial colors and flavors from foods and BPAs from its can lining.

Noting the demand among younger consumers to understand and trust in the companies they do business with, Campbell’s is evolving as the “biggest small food company,” Morrison said, activating its scale and resources behind an entrepreneurial, “indy” spirit.

“Let me state it clearly and unambiguously: Our goal is to be the leading health and well-being food company,” she said. “When people look for something real to eat and something that tastes good, they’re going to look for the food we make. We chose this path not because it’s expedient, but because we believe it represents the future of the food industry and that it will lead to differentiated performance.”

Acting on this goal “has become part of the fabric of who we are,” Morrison said, and on occasion has brought Campbell’s into cross-purposes with peers represented by the GMA. While the association, for example, fought implementation of Vermont’s GMO labeling bill, Campbell’s — while never taking the position GMOs were unsafe — sensed that customers wanted such transparency and proceeded to meet those standards. Campbell’s is also moving faster than many peers on the FDA’s new Nutrition Facts panel, striving to meet the original July 2018 deadline despite a delay in the timeline that was applauded by the GMA on behalf of member companies.

While the GMA argues it proceeds on these issues behind common-sense approaches that value the economic interests of its members and consumers, the consumer-first world often doesn’t see it that way. It’s the appearance of GMA’s resistance to change, and often unpopular advocacy of business interests themselves, that Campbell wants to shake off.

Asked by an analyst to explain the decision to leave GMA further, Morrison turned it around. “Why should we stay in it?” she replied. “The GMA has grown over the past few years more as a lobbying and regulatory association dealing with a lot of the regulatory issues in the food industry. What we have experienced is finding ourselves at odds with some of the positions. … It’s comprised of mostly very large food companies and not a lot of small companies and our philosophy seemed to be aligning more with the smaller food companies.” To that end, Morrison said the company was now the largest participant in the Sage Project, a food data application that amps up transparency by, among other things, revealing by animated gifs how many minutes of jump-rope or dancing are required to burn off calories in a serving of Campbell’s Well Yes soups. Sage may advance Campbell’s transparency efforts but won’t do much on Capitol Hill.

I reached out to Roger Lowe, GMA’s VP of strategic communications, to respond to Morrison’s question. Why, I asked, should a food company stay in?

“In 2017, the Grocery Manufacturers Association has gained new members of all sizes from throughout the industry. They tell us they are joining GMA because they want to be part of our work committed to consumer transparency, sustainability, food safety, nutrition and retailer collaboration. As the leading trade association for food, beverage and consumer products manufacturers, GMA is led by an active and engaged board of industry leaders,” he said in an email.

“It was GMA’s leadership that helped achieve passage in 2016 of a national standard for GMO disclosure. We supported a national standard that enabled our members to maintain their efficient supply chain costs. We supported an option that can provide consumers more information about GMOs than could ever fit on a label. Today, our innovative consumer transparency tool, SmartLabel, is being widely adopted, with nearly 10,000 products already using SmartLabel and 30,000 products expected by the end of 2017. In addition, it was GMA's leadership working with the Food Marketing Institute that created common wording for product code dating to reduce consumer confusion and food waste.

“We are always sorry when a member company decides to leave our trade association, which happens from time to time for a range of reasons,” he added. “We will miss Campbell’s participation and wish them well.”

Consumers torn between health and indulgence in snack foods
Aug 12, 2022