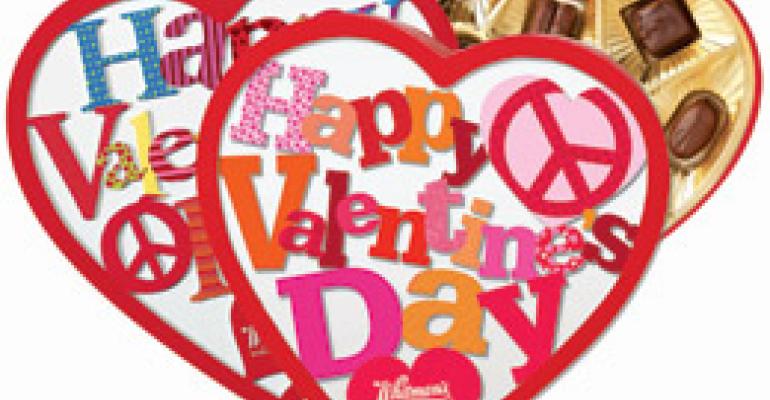 Valentine's Day may not be the biggest confection sales holiday, but it offers the sweetest cross-merchandising opportunities.

Godiva, Ghirardelli and Lindt are the featured chocolate brands, and stores can select whatever wines they would like to feature.

Market Centre launched the concept after learning about increasing interest in wine and chocolate pairings. The combination has been written about in food and confection magazines and featured at many trade shows.

“There are many gourmet chocolate varieties available today. Finding the perfect wine or port to go with them can be fun for the gourmet wine and chocolate connoisseur,” Allen told SN.

“Stores were able to view all items at once and various merchandising solutions,” he said.

One of Market Centre's newest offerings is a turnkey confection program for the four big confection holidays: Halloween, Christmas, Easter and Valentine's Day.

Retailers that opt-in for the four-sided, walk-around display on wheels receive a pre-planned distribution of product for each candy season, along with a schematic programmed for the display.

“The wheels allow the display to be moved around and positioned in high-traffic areas,” said Allen.

Sales for the four key holidays represent 25% of the total $29 billion retail confectionery sales, according to Jenn Ellek, spokeswoman for the National Confectioners Association, Washington.

Valentine's Day comes in last of the four holidays in terms of overall sales, but garners the largest single-day (the day before Valentine's Day) confection sales, according to Ellek.

What makes Valentine's Day a particularly tough retail holiday is that it comes right after Christmas and the Super Bowl, said Ellek.

But retailers and manufacturers have made the most of it with innovative new items and cross-merchandising ideas, she said.

Take H.E. Butt Grocery's Central Market, San Antonio. It has an interactive food/beverage- and chocolate-pairing game on its website, centralmarket.com. Shoppers who play the game learn such combinations as a glass of red wine pairs well with chocolate chili truffles.

Tomorrow concludes Central Market's weeklong Chocolate Festival, during which it has promoted Bissinger's, Xan Ladybug, John Kelly and other chocolates.

As part of the festival, Central Market added a variety of “cooking with chocolate” classes to its cooking school schedule.

“We'll teach you some blissful new ways to use a favorite ingredient,” Central Market stated in promotional materials.

Manufacturers have cross-merchandising suggestions of their own. Mars, for instance, encourages retailers to merchandise its $3.99 Dove Silky Smooth Dark Chocolate & Cherry Swirl Hearts with wine.

“Display these new Promises with wine and create a one-stop romance center with the perfect accents for a special evening,” Mars states in trade promotion materials.

The hearts are among many new items Mars is offering for the holiday. It also launched a Dove premium heart tin that sells at a suggested retail price of $14.99. The tin is filled with three flavors of Dove chocolate — milk chocolate creamy caramel, milk chocolate peanut butter truffle heart and dark chocolate truffle heart. Messages of affection, such as “I Love You” and “Follow Your Heart,” are printed under every piece of chocolate.

Then there's M&M'S Cupid's Mix Tins, a pocket-size tin that contains two M&M'S fun-size packs. Each carries an SRP of $1.99.

Mars has participated in cross-merchandising Dove chocolates in the greeting card department for the last two years, according to Timothy LeBel, vice president of sales and in-store solutions for the grocery and value channels, Mars Chocolate North America.

This year, it launched a Kroger-exclusive promotion connecting discounts on a future shopping trip to Mars purchases. Shoppers who purchased $15 in Mars products received $5 off their next shopping trip; those with $10 in purchases received $3 off.

“We're seeing a broader interest in hearts that target kids, tweens and men,” he said.

To cater to these trends, Russell Stover has such options as a “Googley Eyes” chocolate heart for kids, $3.99, as well as several options for teens: a Crystal Heart with Assorted Chocolates, $7.99, and a chocolate heart featuring a peace sign, $6.99.

While they were once largely focused on $1 to $9.99 offerings, retailers no longer shy away from higher price points.

In addition to national brands, retailers are increasing the visibility of their store-brand chocolates for Valentine's Day. Kroger, for instance, is promoting its just-launched authentic Belgian chocolates under its Private Selection brand. The chocolates come in milk, dark and white chocolates accented by flavors of coffee, lemon and caramel.

“We invite you to join us as we embark on a wondrous journey of sweet delight, where real chocolate is made with premium ingredients, passion and flair by true master chocolatiers,” Kroger stated.

Brookshire Grocery Co., Tyler, Texas, has put its World Classics candy in the spotlight. Along with featuring it in the candy section, the chain is also cross-merchandising it in floral and other perimeter departments.

The retailer goes all out in support of Valentine's Day in other ways. While the holiday may not be as big as Halloween in terms of sales, it's a big revenue generator because people are less price-sensitive about the items they buy, according to Don Gaynier, Brookshire's candy category manager.

“People don't mind spending a bit more for an indulgence for someone they care about,” he said. “They're not looking for 99-cent items.”

Valentine's Day candy sales have been adversely affected over the last few years in Brookshire's operating areas due to harsh winters and, consequently, reduced store traffic. This year, however, the weather has been mild, so he anticipates more people will visit the store in hopes of finding the perfect gift for their valentine.

Another plus is the timing of the holiday. Since it lands on a Monday this year, fewer people will venture out to restaurants, opting for gifts at retail instead.

“It works a lot better in our favor if it falls on a Monday,” he said.

Also helping supermarket confection sales is the availability of Belgian chocolatier Godiva, said Gaynier. The brand that was once limited to specialty stores, started supermarket distribution in 2009 with its lower-priced Gems line.

While Godiva and other confection companies often provide cross-merchandising tips, so do wineries.

“Wineries have given us great insights as to which chocolates pair well with which wines,” Gaynier said.

For Valentine's Day, it merchandises chocolates in floral. It also used freestanding displays consisting of candy, flowers and cards.

“Having a floral department gives us an edge,” he said. “Many of our competitors can't do that.”

“For the love of Chocolate” is the theme of Brookshire's February company newsletter. The publication details differences between dark, milk and white chocolates as well as the food and beverages that complement both. In addition, the newsletter discusses the benefits of the antioxidant properties in dark chocolate.

“We want to communicate all the wonderful facts about chocolate,” Gaynier said.