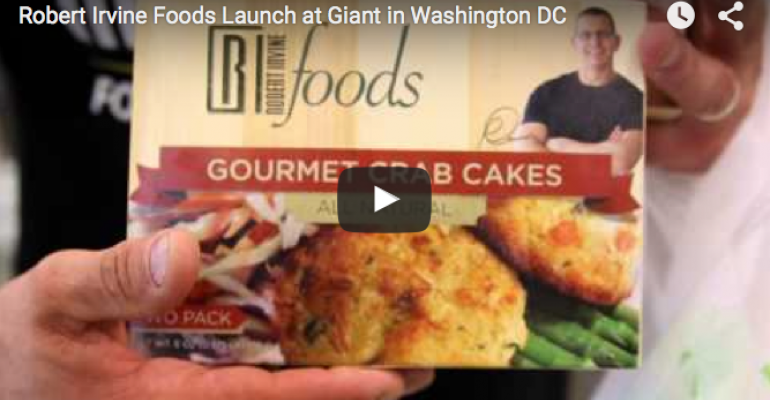 Celebrity chef Robert Irvine was on hand to promote a new line of signature groceries available exclusively at Ahold's Giant-Landover chain at the retailer’s newest store, which opened Friday in Alexandria, Va.

Irvine, the muscle-bound host of “Restaurant: Impossible” on the Food Network, earlier this summer announced a partnership with Giant Food to sell a line of “better for you” frozen items under the Robert Irvine Foods brand exclusively at Giant’s 168 stores, with a portion of the proceeds benefiting wellness initiatives for military families through the USO. The line includes all-natural crab cakes, a reduced fat and calorie cheesecake, and “fit crust” pizzas.

According to Giant spokesman Jamie Miller, the partnership between Irvine and Giant was sparked by a meeting between the chef and Giant president Gordon Reid at a charity event a year ago.

The new Giant at Potomac Yards replaces a nearby location.

We <3 you @RobertIrvine! Tweet us your pics if you meet Robert or if you visit our new #GiantFoodPotomacYard #FitFuel pic.twitter.com/97RqmTKfG0