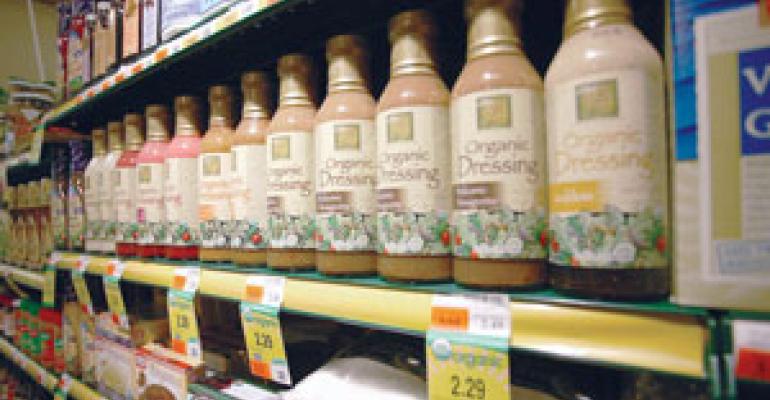 Supermarkets are improving the shape of Center Store with a healthy dose of natural and organic products and services. Close to 95% of food retailers polled as part of SN's fourth annual survey of Center Store performance plan on bolstering their health and wellness positioning in the next 12 months. A substantial 68.3% will do so by implementing nutritional shelf tags and signage, and 61% will update

Supermarkets are improving the shape of Center Store with a healthy dose of natural and organic products and services.

Close to 95% of food retailers polled as part of SN's fourth annual survey of Center Store performance plan on bolstering their health and wellness positioning in the next 12 months.

A substantial 68.3% will do so by implementing nutritional shelf tags and signage, and 61% will update their natural and organic product assortment. Newsletters and online information will aid 36.6% of retailers in this endeavor, while 19.5% will host health-focused in-store lectures.

“The aging population is seeking easy solutions to obesity and age-related diseases that are rising quickly in this age group,” noted one respondent (comments were kept anonymous). “We can add value through shelf-edge information and guidance on low-sodium, low-sugar, diabetic-friendly, organic and other nutritional information.”

Retailers represent close to a quarter of the 181 wholesaler, manufacturer, sales agency and other respondents who participated in the email survey between May 8 and 17.

Noted by more than half of the retailers as the biggest Center Store trend (54.1%) as well as the area of greatest product innovation (53.7%), natural and organic merchandising will become, for many, a point of differentiation.

“Consumers are even more time-crunched today with work, kids, sports and individual activities,” said one respondent. “They're living longer and making better choices. That is why the natural segment is growing so much. Look at the big chains like Whole Foods, and even small local ones like New Seasons. That is where the industry growth is really coming from

Another noted, “Most supermarkets need to find a niche other than price in order to compete, as they cannot compete on price with club, dollar or mass.”

Retailers are most commonly focusing on assortment (34.1%) again this year as their No. 1 strategy for drawing shoppers in.

“Assortment doesn't mean having everything; it means knowing your customer and having things that the customer needs and wants,” said one retailer.

“The only way to rebuild Center Store sales is to differentiate the Center Store product mix with items targeted to the market,” echoed another.

A significant portion of retailers (88.2%), will actively expand their ethnic marketing reach in the coming year, up from 85.9% last year. About 73% of retailers will add to their ethnic product assortment, compared with 68.6% last year. An addition of bilingual in-store communications/employees is planned by 34.1% of respondents, up from 31.3% in 2006. An ethnic private-label launch is on the horizon for 17.1% of 2007 respondents, compared with 21.9% in 2006.

Although it was last year's least popular strategy for fighting off the competition, value-added services (clubs, loyalty cards, education programs) rose to second ranking this year. The choice was deemed the most effective strategy by 24.7% of 2007 respondents, compared with 13% who said so last year.

Such offerings often provide the “theater” necessary to combat interdepartmental pressures, many noted.

When polled about the value-added services that can best build loyalty in Center Store, product sampling (29.3%) was the most popular response, followed by shelf-level nutritional information (22%), in-store cooking demonstrations/recipe distribution (17.1%), loyalty clubs (9.8%) and educational events (4.9%).

“Showing customers meal prep options and sampling will always increase movement, particularly when presented face-to-face. Customers are looking for new ideas and new, exciting products to try,” said one respondent. Of shelf-level nutritional information, another said, “It's the only option that is available to all consumers all of the time. Samplings and demonstrations are available for limited periods of time.”

Retailers seem confident in these strategies' ability to glean sales.

“This growth will be achieved as a result of some categories and segments growing at a faster rate (sauces/marinades, ethnic foods, organic gourmet) and others being flat or declining (pasta, cookies/crackers, soda),” said one respondent. “The difference in growth rate among categories will come from mature vs. developing categories and perceived health benefits.”

Manufacturers were less optimistic: 17.9% project a decrease in sales; 14.1% anticipate sales will remain the same, and 62.8% expect them to increase.

Despite Wal-Mart's attributing a portion of its 3.5% dip in April same-store sales to the recall of several of its Menu Foods-manufactured company-brand products, the recall's effect on pet food category sales won't be as dramatic for most retailers, according to the survey's results.

Our name “is on so many items, and consumer confidence in us seems really low right now,” said one respondent who reported its impact as very significant. “Any recall of any product will cause the consumer to think about what they are buying — the confidence level will lower,” said another respondent, who deemed the impact fairly significant.

Just as retailers are looking to differentiate with customized product assortments, manufacturers are striving to fulfill their needs with innovative products.

“New products are always key to attracting customers, but the in-store merchandising is what makes it sustainable,” noted one respondent.

Consumer insights (36%), new products (33.1%), supply chain management (26.6%) and trade promotions (24.5%) were seen as the areas that are lacking/need development in the companies of non-retailer respondents.

Alternative channels are seen as the largest competitive force

What are the biggest threats to Center Store sales in supermarkets?

By what amount do you expect Center Store sales to change this year vs. 2006?

Where do you plan to update/add to your private-label offerings in the next 12 months?

Which will you use to bolster health and wellness positioning in the next 12 months?

How do you plan to increase your ethnic marketing reach in the next 12 months?

How well does your company know who its ethnic shoppers are and meet their shopping needs?

HOW WE DID IT: SN's Survey of Center Store Performance 2007 was conducted May 8-17. It was emailed to print subscribers who provided SN with an email address. SN received 181 responses, broken down as follows: 22.7% retailer, 43.1% manufacturer, 5.5% food wholesaler, 8.8% sales agency and 19.3% other. Totals may not add up to 100 because multiple answers were allowed or because of rounding.

How significant is the pet food recall's effect on pet food sales in your stores?

How well informed are you keeping customers during the recall?