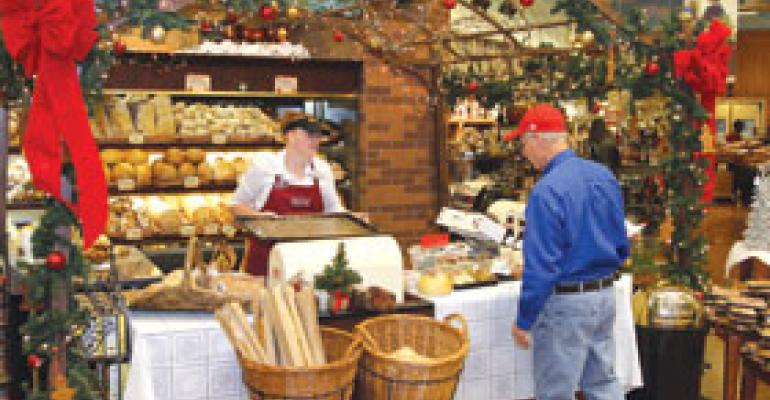 In-store expos, telephone hotlines and instructional videos are among the tools retailers are using to help shoppers survive the holidays

Retailers have launched a variety of in-store and online efforts aimed at helping their shoppers during the busy Thanksgiving-through-New Year period.

United Supermarkets, Lubbock, Texas, even ran an “Entertaining Made Easy Expo” at each of its 10 Market Street stores earlier this month. The event was designed to make it easier for shoppers to host everything from holiday cocktails to corporate functions.

“With the holidays right around the corner, we want to showcase our entertainment services and how we can help ease the burden of event planning while also sharing in the fun with our guests and their families,” Wes Jackson, United's chief merchandising officer, said in a statement.

Each store had about 15 sample stations where shoppers could try holiday-friendly foods like antipasto party platters, cheddar cheese balls, wine and cheese pairings, frozen appetizers and desserts, gourmet chocolates and prime rib roast. There was also a station where shoppers could view and order holiday gift baskets.

“The holiday season can already be stressful without the additional concerns of entertaining,” Jackson said. “Market Street provides every resource to help make our guests' entertaining experiences a breeze by allowing them to focus on the memories they're creating for friends and family rather than organizational hassles.”

The expos were well attended, which United spokesman Eddie Owens attributed to the increased demand for affordable meal ideas.

“Everyone is on a budget and shopping smarter,” Owens told SN. “We want to help them by showing them how to use their time and money wisely.”

This past weekend, it was to host a turkey and wine pairing event, teaming the meat with pinot noir and pinot gris wines from Oregon.

At its annual food and wine expo earlier this month, DLM emphasized other creative ways to combine wine and food. For instance, it suggested serving a sparkling wine with popcorn seasoned with sea salt and shaved truffles.

“It may sound odd, but it's an amazing combination,” Todd Templin, Dorothy Lane's beer and wine director, said of the popcorn/sparkling wine combination. “It's a natural mix.”

Templin said he always tries to get people to think out of the box when it comes to food and wine, even if it's a simple step like drinking red, rather than white, with fish.

“We want to get them to experiment and mix it up a bit,” he said. “Consumers typically gravitate to the same wines. We want to give them the opportunity to break out of the same old routine.”

Dorothy Lane's holiday line-up includes an annual champagne tasting, held between Christmas and New Year's. At this year's event, more than 50 different sparkling wines will be poured. Hors d'oeuvres and dessert will also be served.

Like Dorothy Lane, plenty of other retailers have a full slate of seminar and cooking presentations scheduled throughout the holidays.

Lund Food Holdings, Edina, Minn., is one of them. For Thanksgiving, its Lunds and Byerly's stores will host a two-hour class on how to roast and carve a turkey. Table setting ideas and wine recommendations will also be discussed. The cost is $15.

Another class will focus exclusively on turkey carving and other knifing duties for the holidays. Students will learn how to chop, dice and mince.

Lund is even addressing leftovers, with a class featuring such recipes as Stuffing Bites with Cranberry Sauce, Turkey & Sweet Potato Hash and Turkey Potpie with Corn Bread Crust.

“Forgo the tired turkey sandwiches and reheated sides,” Lund writes in promotional materials. “Take a walk on the wild side.”

Along with in-store cooking classes, holiday phone hotlines are another trend this season. H.E. Butt Grocery's Central Market, San Antonio, launched a Holiday Hotline on Nov. 1 so that customers have a quick-and-easy way to place meal orders.

“We'll be there to offer advice, take your orders, and help make this year's holiday season the best ever,” according to Central Market's promotional materials.

Likewise, the centralmarket.com website has been redesigned to feature holiday recipes, a Thanksgiving countdown calendar and more.

H-E-B, meanwhile, is emphasizing value with under-$30 Thanksgiving meal ideas, as well as “Texas Turkey” suggestions, such as how to deep-fry a turkey.

The heb.com website features an array of instructional videos, including how to select, roast brine and carve a turkey.

Recognizing that the holiday season can be a time of dread for those who are on a weight loss or wellness plan, many retailers are providing better-for-you holiday entertaining ideas.

Big Y Foods' chain dietitian Carrie Taylor says that while people shouldn't deny themselves their favorite foods during the holidays, they can make small recipe changes to make them healthier.

“Let the holidays be for enjoying families and friends around delicious and nutritious foods,” Taylor told SN.

One of the easiest ways to make meals healthier is to make them homemade so that sodium, sugar and fat content can be controlled, said Taylor.

She suggests using a low- or no-salt-added cooking stock, and flavoring with fresh herbs, spices and aromatic vegetables like onions, garlic and celery vs. salt.

Another one of Taylor's suggestions is to go “crustless” by making parfait-type desserts with graham cracker crusts vs. traditional pies. She also advises using whole wheat flour quinoa, brown rice and whole wheat pasta in recipes.

“There's always a way to modify a recipe and make it healthier,” she said.

Though people are often reluctant to change a years-old family recipe, she lets them know that small modifications can have big rewards.

She suggests that home chefs start their own recipe traditions with better-for-you options like pumpkin tacos made with low-fat cream cheese and spices.

Next month, Ruhs will author a column in the weekly ad where she suggests better-for-you products for people to serve during the holidays. For appetizers, she suggests serving Pop Chips and dip. Pop Chips are potatoes that, through a heat and press technique, are popped, resulting in a chip that has half the fat of fried chips.

“The ‘popping’ technique creates a chip that crunches and tastes great,” she said.

She also suggests substituting sour cream in dips with Greek low-fat yogurt, a move that can cut calories in half.

Zero-calorie sweetener stevia will be another featured item in the December ad. Ruhs suggests that people substitute some of the natural sugar they use in recipes with stevia.

“We don't expect people to get rid of all the sugar in their recipes, but they can at least reduce it by using stevia,” she said.

SweetLeaf, a stevia brand, makes liquid droplets that can be used to flavor still water or seltzer.

“One drop is all you need to have a great-tasting, no-calorie drink,” she said.

Another better-for-you beverage suggestion from Ruhs is substituting “soynog” for eggnog.

“It's a good-tasting, healthy snack,” she said.

Ruhs suggests replacing the salt shaker with Mrs. Dash, a salt-free seasoning blend that comes in such flavors as garlic and herb, and fiesta lime.

“I always encourage people to use Mrs. Dash because by using herbs and spices you're not only reducing salt, but boosting the antioxidant levels of the foods you eat,” she said.

By substituting a few ingredients with healthier options, they can eat healthier without sacrificing flavor.

“People are looking for ideas to modify recipes to make them healthier without changing the taste much,” Ruhs noted.

Even stuffing can be made healthier by substituting regular sausage with Morning Star's meatless sausage, or using whole grain bread instead of traditional white.

“While people want to eat healthier throughout the holidays, they don't want a bunch of tasteless meals,” she said.