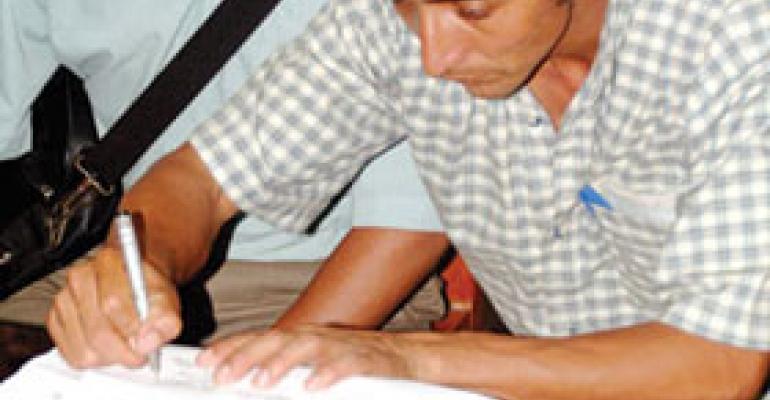 Coffee With a Conscience

Java drinkers don't have to travel far to find a cup of Joe that's not only high quality, but also good for the environment and the farmer. A quick stop at Target will do. That's because Target sells organic, fair trade and even cup of excellence coffee, a coveted designation given to the best-of-the-best coffee. It was once inconceivable that such exceptional offerings would be available at a discount

Java drinkers don't have to travel far to find a cup of Joe that's not only high quality, but also good for the environment and the farmer. A quick stop at Target will do.

That's because Target sells organic, fair trade and even “cup of excellence” coffee, a coveted designation given to the best-of-the-best coffee.

It was once inconceivable that such exceptional offerings would be available at a discount chain.

That's certainly no longer the case as retailers wake up their coffee sections with specialty brews that go far beyond providing a morning jolt of caffeine.

What's more, today's coffee drinkers are specifically seeking out roasts that have social and environmental benefits. Whether it's saving the rainforest, keeping harmful chemicals in check or paying farmers a fair price, coffee buyers are increasingly seeking out so-called responsibly grown coffee.

At Whole Foods there's coffee backed by the Whole Trade Guarantee, meaning the brand meets high-quality standards and ensures fair wages for growers and sustainable farming practices. Likewise, with every purchase of Whole Foods' Allegro Coffee Co.'s Kanyovu light-roast coffee, shoppers support efforts to reforest the area around Tanzania's Gombe Stream National Park, a preserve in the region where the coffee is grown.

“These investments make huge impacts in the lives of farmers and workers, supporting education, healthcare and other vital social services,” Gallegos told SN.

Starbucks began purchasing Fair Trade Certified coffee in 2000. Last year, it increased it purchases to 40 million pounds - making it the largest purchaser of Fair Trade Certified coffee in the world. It buys most of its coffee using its Coffee and Farmer Equity (CAFE) practices, measurable standards for product quality, payment transparency, social responsibility and environmental leadership.

Along with Fair Trade, a newer business model is called direct trade. Direct trade is similar to fair trade in that it seeks to provide a fair price for small farmers and encourage them to develop sustainable, ecologically responsible practices.

The main difference between direct trade and fair trade is that in fair trade, buyers don't pay more for coffee when the quality improves, said Joe Prewett, vice president of marketing for Coffee Bean International.

“With our program, we reward farmers for their hard work,” Prewett said.

Consumers benefit because they get the absolute highest quality coffee, said Prewett.

This is critical at a time when coffee drinkers have more discerning tastes. After commonly visiting Starbucks or another coffee house, consumers often want to replicate that experience at home.

“Premiumization is a big driver in the coffee business,” he said.

Direct trade provides transparency in terms of the price that both seller and buyer agree on, said Paul Thornton, Coffee Bean International's coffee buyer and roastmaster.

“The grower and buyer both know what's being paid for products,” Thornton said.

“We want to make sure they get paid enough to feel that they're getting the best deal for the best quality,” he said.

SCAA's Rhinehart describes direct trade as an approach that emphasizes a high-quality product and a quality of life for farmers.

“It's a good concept proven by a small group of committed players,” he said.

“We believe human effort is the most critical factor in quality coffee and that the growers who do the best work should get the best price,” according to company marketing materials.

Steiner, of PCC, has researched direct trade to see if it could be fit for PCC Markets. She likes the concept since it helps farmers financially.

But she has concerns, saying direct trade agreements don't have uniform trade or labor standards, or third-party inspections. She fears this could lead to misinterpretation and misuse of the direct-trade term.

While Fair Trade focuses on empowering people and communities so that through trade they can lift themselves out of poverty, direct trade is about working directly with one farmer to get the highest quality coffee, Wagner said.

“We support the effort to help farmers grow higher quality crops, but we'd like to see that knowledge dispersed,” said Wagner.

Wagner added, “Direct trade is not bad, we just don't believe it's sustainable.”

25%
The growth experienced by Fair Trade Certified coffee in 2009