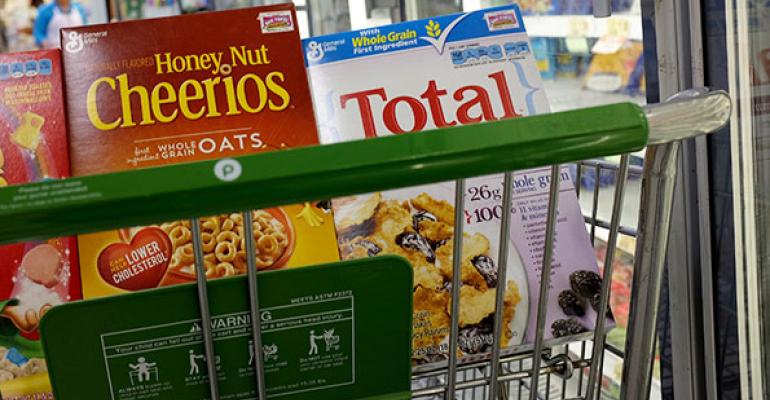 General Mills to label all products with GMO ingredients

In order to comply with Vermont’s pending GMO labeling requirements without increasing costs to customers, General Mills plans to include GMO labels on products nationwide, the company’s EVP and COO announced in a blog post.

“We can’t label our products for only one state without significantly driving up costs for our consumers and we simply will not do that,” EVP and COO Jeff Harmening wrote.

“The result: consumers all over the U.S. will soon begin seeing words legislated by the state of Vermont on the labels of many of their favorite General Mills products.”

Harmening said that research has shown GMOs are safe to consume, but acknowledged that “some consumers are interested in knowing which products contain GMO ingredients.”

He also called on legislators to come up with a “national solution” for GMO labeling. Earlier this week, a Senate bill that would have preempted state labeling initiatives like Vermont’s and created a voluntary national labeling standard failed to move forward in the Senate.

“We will continue advocating for a national solution to GMO communications to consumers, but on behalf of all the passionate food makers here at General Mills, we look forward to moving beyond this divisive topic and getting back to creating great food that people love,” said Harmening.

Gary Hirschberg, chairman of Stonyfield Farm and chairman of the Just Label It initiative, praised General Mills’ “real leadership” in a statement.

“If large companies like General Mills and Campbell’s are accepting that this is what consumers want, then so should our political representatives. It is now time to put this debate behind us and realize that the citizens have spoken,” said Hirschberg.

In January, Campbell Soup Co. announced it would roll out GMO labels on products nationwide if a federal requirement were not enacted.

Albertsons adds sustainable wines to its Own Brands offering
Apr 07, 2021