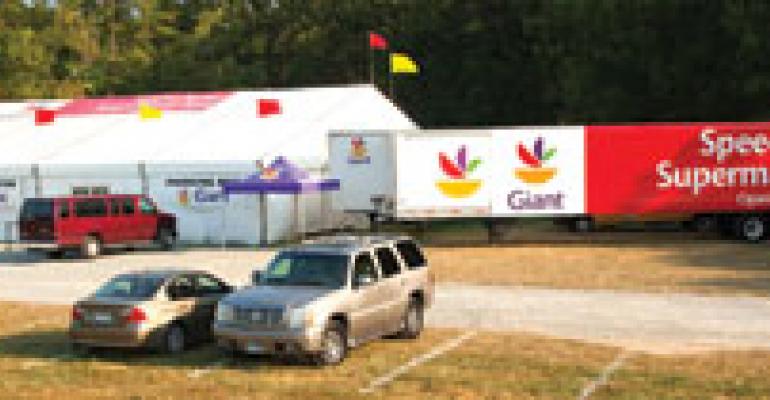 LANDOVER, Md. Many food retailers try to attract NASCAR fans to their stores. But Giant Food brought its store to them. The retailer created a 5,000-square-foot, store on the grounds of the Dover International Speedway, Dover, Del., one weekend last month. The store catered to fans attending the Sunoco 150 NASCAR K&N Pro Series East, the 200-mile NASCAR Nationwide Series, and the AAA 400 NASCAR Sprint

LANDOVER, Md. — Many food retailers try to attract NASCAR fans to their stores. But Giant Food brought its store to them.

Located near the entrance of the speedway's RV camping site, the store stocked 2,500 items to meet the camping needs of race fans. Along with staples like lighter fluid, propane and firewood, it offered produce, meat, milk, eggs, bread, spaghetti sauce, soap, shampoo and many other items. It was open 7 a.m. to 10 p.m. for three days.

“The Giant-Landover pop-up store at Dover International Speedway provides an opportunity to showcase the Giant-Landover brand to thousands of NASCAR fans through a convenient, on-site store offering 2,500 items perfect for tailgating,” Giant spokesman Jamie Miller told SN. “It also gives us the chance to share our enthusiasm for the NASCAR experience with customers who shop with us at their local Giant store.”

Housed under a large tent, the store featured a wooden floor and shelving. Many of the featured items were NASCAR official partners, including Kraft Foods, Procter & Gamble, Unilever and Mars.

All three days of operation, shoppers at the track store could enter to win NASCAR prizes, including autographed merchandise; the opportunity to view races in the Monster Bridge, a 56-seat, glass-enclosed structure that extends over the track; tickets to the Monster Mile Club, an all-inclusive pre-race hospitality area; and trackside tour passes.

“It's truly amazing to see a supermarket of this magnitude on our grounds,” Mark Rossi, vice president of sales and marketing for Dover Speedway, said in a statement. “Whether [NASCAR fans] are staying in an RV for the entire race week, or just tailgating for the day, Giant will be the primary destination for all of their grocery needs.”

Mars Chocolate North America, marketer of M&M's, Snickers, Combos and other brands, was eager to be part of the track store, said Philip Grieco, Mars' director of sponsorship and sports marketing.

“It allows us to tap into the most passionate of consumers and put our products where they already are,” he said.

Though a first for Giant, the track store concept is not new. Brookshire Grocery Co., Tyler, Texas, operates an on-site track store at the Texas Motor Speedway each year.

Like the Giant pop-up concept, Brookshire's track store is full-service, offering everything from dairy, meats, produce and fresh coffee to breakfast burritos, fresh doughnuts, smoked chicken, ribs and sausage. Pricing is the same as that in regular stores.