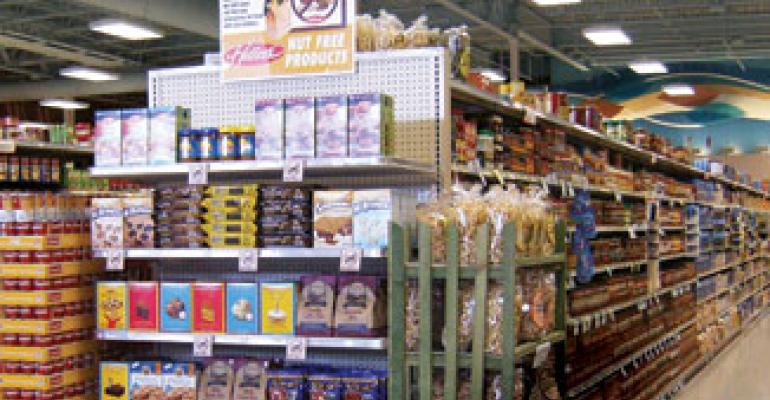 Compared to some foods under scrutiny in the school cafeteria, a peanut butter and jelly sandwich seems innocuous enough. But the popular staple is a big no-no for certain schools and childcare centers: those designated peanut aware. Food avoidance is the only proven way to manage peanut and tree nut allergies, so for school-age sufferers these places are a safe haven. Dangers don't just surround

Compared to some foods under scrutiny in the school cafeteria, a peanut butter and jelly sandwich seems innocuous enough. But the popular staple is a big no-no for certain schools and childcare centers: those designated “peanut aware.”

Food avoidance is the only proven way to manage peanut and tree nut allergies, so for school-age sufferers these places are a safe haven. Dangers don't just surround ingesting allergen ingredients. Cross contact between food and residue left on lunch tables are also cause for concern, according to Jennifer Roeder, spokeswoman for the Food Allergy and Anaphylaxis Network, Fairfax, Va.

Not every district mandates an outright ban, but many are setting aside special areas for peanut and tree nut allergy sufferers, Dr. Michael Hepner, an internal medicine, allergy and immunology specialist explained.

“Most schools have lunch areas that are nut- and peanut-free, and nut-free classrooms,” he said.

The numbers have grown along with cases of peanut allergies in children, which more than tripled between 1997 and 2008, according to FAAN. About one in three peanut sensitive individuals is also allergic to tree nuts, Hepner said.

The trend has changed the way parents shop for groceries this back-to-school season. Once limited to parents of allergy sufferers, the onus for keeping lunchboxes safe has extended to their classmates' folks as well.

To make their job easier, seven-store Hiller's Markets is testing nut-free zones in two of its stores, with similiar plans for a third.

“Schools are so stalwart in banning peanut-based products. At least here in Michigan you can't even bring peanut butter to school anymore,” said Jim Hiller, president and chief executive officer of Hiller's Markets.

Whereas in the past Hiller's concentrated on expanding its gluten-free offerings to appeal to celiac disease sufferers, sourcing thousands of nut-free foods is its new goal.

The idea came while Hiller's was doing what it does best: listen to shoppers.

“In the past year more and more customers have come to me and said ‘I have a child who has severe nut allergies and their life is difficult because of it,” Hiller said. “I have a responsibility to find a way for them to live a life that is similar to people who don't have nut allergies.”

Simply being nut-free isn't enough to gain placement in the new sections that are anchored by an endcap in participating stores. Qualifying items must come from a facility that's certified nut-free. A nut-free logo on their shelf tag helps them stand out.

Hiller is doing all in his power to keep hidden nut residues far from these foods.

The importance of doing so hit home when a friend's grandson went into anaphylaxic shock upon boarding an airplane. The culprit was peanut dust left on the seat by the passenger who preceded him.

“What came as a surprise was the ferocity of the allergy,” Hiller said.

Since then, the Southfield, Mich.-based family-owned retailer has brought in 100 new products. Among them is Clabber Girl Baking Powder, one of the few that is guaranteed nut-free and produced in a dedicated peanut-free facility; Enjoy Life Snack Bars, made without wheat, tree nuts, dairy and peanuts, in a nut and gluten-free bakery; and SunButter Creamy, a peanut butter alternative that is tree nut- and peanut-free.

Hours per day are dedicated to tracking down more products, with the goal of hitting 2,000 in the near future. The foods will not be replacements; rather they'll round out Hiller's offerings.

Finding products that fit the bill has been a challenge.

Although Hiller's has helped revitalize its state's economy by sourcing from and highlighting local vendors in the past, it's had to scour a much larger geography for foods produced in nut-free facilities.

“In order to do this, we're having to not just look locally and nationally, but globally,” Hiller said. “The Europeans are ahead on this as are the Canadians.”

Hiller's nut-free endcaps are different in that they're designed to highlight dozens of items at a time. Products will rotate each week.

“The purpose is to draw attention to the fact that we're now beginning to do this,” Hiller noted.

Also creating a buzz are nut-free store tours — the first in a series designed by Hiller's to expose Michigan shoppers to free advice from medical professionals.

Many participants had already spoken to their primary care doctors about allergies, but were able to get a second opinion for free.

That's important in a state like Michigan where high unemployment rates contribute to the numbers of uninsured. But they're not the only ones facing healthcare hurdles. Those with insurance face higher deductibles, co-pays, and higher prescription costs, Hepner said.

“They often wanted a second opinion or a little more detailed explanation for some of their questions or concerns,” he noted.

The tours were such a hit that Hiller's hopes to organize nut-free fairs before year's end. In the past, it's hosted fairs on gluten-free foods with up to 30 vendors participating. Hiller expects that a nut-free fair would draw similar interest.

“We're finding that the number of people with a child with this problem is far larger than anticipated,” he said.

Another surprise to some is the cost of foods produced in a facility that is certified nut-free. Hiller attributes this to limited demand, and expects prices to eventually moderate as they did with gluten-free items.

“At first gluten-free products were very expensive, but now they're close in price to conventional,” he said. “Since we've developed so much demand we can negotiate good prices and make some ourselves.”

As is often the case at Hiller's, the retailer will let shoppers dictate how large its nut-free selection will get.

Just last week, a member of its team met with a parent of a peanut allergy sufferer to get her perspective.

“We want to understand this at an organic level and see what we can do to make it better,” Hiller said.

MORE OBVIOUS PEANUT SOURCES, like peanut butter, are easy for allergy sufferers to spot. But it's news to many that pudding can be an unexpected source of the legume.

Here are some others:

CVS unveils store-brand additions across the store
May 26, 2021