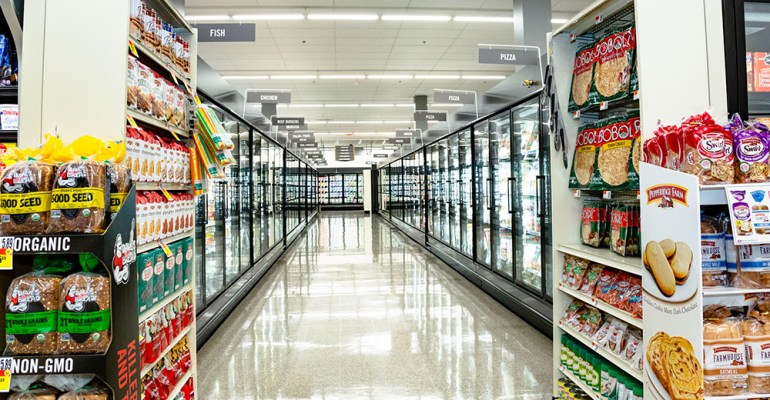 Later this year, Nestlé USA plans to begin shifting from direct-store delivery (DSD) to a warehouse distribution model for its frozen pizza and ice cream businesses.

With the move, the packaged foods giant will close eight company-owned frozen distribution centers and its frozen inventory transfer points as well as lay off about 4,000 employees. The phased transition is slated to start in the 2019 third quarter and be completed in the 2020 second quarter.

Nestlé announced the plan this week at its 2019 Investor Seminar in Arlington, Va. The company said the change will enable it to consolidate frozens distribution under the “highly efficient” warehouse network used for its Stouffer’s, Lean Cuisine and Hot Pockets frozen meals and snacks, which had 2018 sales of $2.2 billion.

"Ice cream and pizza are growing categories in which we hold strong leadership positions," Steve Presley, chairman and CEO of Nestlé USA, told investors at the May 7 event. "As we continue to focus on driving long-term profitable growth, leveraging a simpler route to market unlocks resources we can use to fuel our efforts in demand generation, such as product innovation and brand building."

Nestlé noted that its warehouse network will provide a simpler, more cost-efficient distribution paradigm than its DSD arm, which makes about 3 million deliveries annually over 2,000 routes. What’s more, the company said, the historical advantages of DSD — speed to shelf, incremental displays, extended channel reach and improved on-shelf performance — have dissipated as trading partners have migrated to consolidated, centrally negotiated planograms and the food industry adapts to emerging omnichannel retail and supply models.

Over approximately the past year, U.S. sales of frozen pizza are up 3.1%, while ice cream sales have climbed 3.5%, Nestlé reported. The company also has introduced $350 million in new products over the past 36 months.

"Moving to a warehouse model has numerous benefits for us and our retail customers," Presley explained. "By taking advantage of the unmatched breadth and depth of our existing frozen warehouse network, our retail customer partners can better leverage their existing networks. This change is a win-win for Nestlé and our customers."

Nestlé projects the frozen pizza and ice cream DSD-to-warehouse transition to result in a one-off cost of $500 million. The company said that it has been collaborating with retail partners to prepare for the change since the early part of the year and is currently finalizing plans for the transition.

"This decision came after careful consideration and, while critical to achieve our business goals, it will impact employees in our sales and supply chain teams,” Presley added, “These employees have worked incredibly hard to serve our customers. Treating them with respect through this process is a top priority for us, and we are committed to doing all we can to provide them information, resources and support."

A recent study by The NPD Group revealed that consumers are showing renewed interest in frozen foods as they seek more convenient meals and snacks. According to the research firm’s Future of Dinner report, frozen foods were included in 9.8 billion eating occasions at home, up 2% from a decade ago. “Demographic shifts, like Millennials moving into the busiest times of their lives juggling spouses, kids and a career, are fueling a greater need for the convenience that frozen foods offer,” NPD food industry advisor David Portalatin observed.