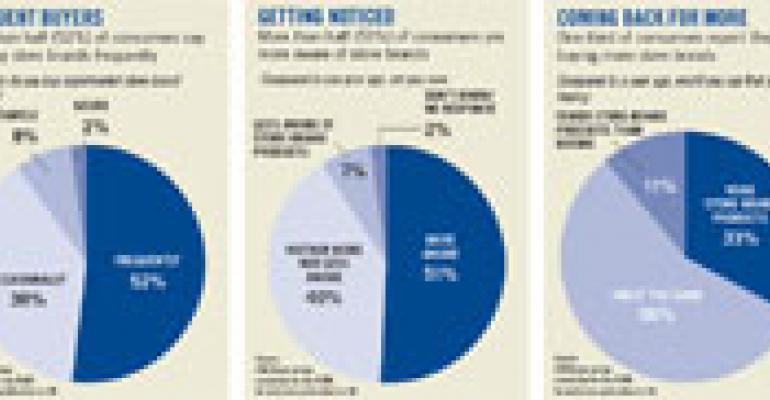 New and improved store brands have made an impression on consumers, a new survey shows

Shoppers have noticed the high-quality ingredients, updated packaging and other enhancements to the store brands they buy.

Nearly half (49%) of consumers say supermarket private-label products have improved either “greatly” or “somewhat,” a 10-point rise from last year, according to a new survey.

That sentiment holds particularly true for affluent shoppers, those with household incomes over $75,000. Of these shoppers, 55% have taken note of improvements in the store brands they buy, according to the Private Label Manufacturers Association's survey, conducted by GfK/Roper for exclusive publication in Supermarket News.

The survey was conducted Dec. 11-12 via telephone among 754 primary household grocery shoppers.

Among other survey results, more than half (52%) of consumers say they are buying store-brand products “frequently.” Just 2% said they “never” buy store brands.

In addition to actual purchases, consumers are simply noticing store brands more. More than half (51%) of all consumers say they are now “more aware” of store brands than they were a year ago.

Similarly, 53% of women surveyed said they are now “more aware,” compared with 47% of men. Just 7% describe themselves as “less aware” of store brands than they were a year ago.

PLMA President Brian Sharoff attributes the heightened sense of awareness in part to the continued media coverage of the recession and, in response, how consumers are saving money. Consumer Reports, for example, has extensively covered store brands in 2009 and 2010.

“News stories on television, in newspapers and magazines, and on the Internet have focused on what can consumers do to save money,” Sharoff said. “Purchasing store brands has figured prominently in those stories.”

“The savings offered by the store-brands cart was always impressive, and frequently an eye-opener to shoppers,” said Sharoff.

This is particularly true for younger consumers, of whom 45% said they are buying more store brands.

While the recession has helped consumers shift to store brands, growth can also be attributed to the many years retailers have spent upgrading their products to make them more competitive, Sharoff said.

Consumers who buy private label are overwhelmingly happy with their decision, with 80% reporting that private label is either “equal to” or “better than” national brands. That's up from about 77% who said the same in a January 2009 GfK study.

This is a result of the years retailers have spent improving packaging and innovating through creative product concept rather than merely imitating the brands, Sharoff said.

“The right level of quality inside the package persuades the customer that the product is worth buying again,” said Sharoff.

Consumer shopping habits play a strong role in the success of store brands. Take shopping lists. Nearly three-fourths of respondents said they “always, almost always or as often as possible” make a list before they go to the store.

Just 16% said only “always or almost always” specify a particular brand on their shopping list.

When asked what factors influence their decision in the store to purchase a specific brand, 47% cited “price, including discounts, deals and coupons” as the most important factor. Another 26% said that “familiarity or past experience with particular brands” was most important, while 21% said they make a decision after “comparing nutritional or labeling information.”

In a follow-up question, when asked to cite the second-most-important factor influencing their decision, 35% said it was “familiarity or past experience” with a brand and 29% said it was price.

In order, influences that were cited as the third-most-important factor to shoppers were: familiarity (24%), an impulse to try something new (24%), nutritional and labeling information (23%), price (15%) and attractive packaging (10%).

Among other findings, consumers are reducing the number of stores they regularly shop in. More than one-third (39%) say they mostly shop only one store for their regular household groceries, up from 32% who said the same in a September 2010 GfK study.

This is especially true for younger (18 to 24) consumers, of whom two-thirds said they are sticking with one store.

Three-store shoppers dropped considerably: Only 16% say they shop in three stores, compared with 29% who said the same in a GfK study conducted in September. Just 3% shop at four or more stores.

This new shopping behavior can be attributed, in part, to the high price of gasoline and consumers trying to save money. But Sharoff said it's mostly because “consumers are finding very competitive prices at their local supermarket and don't have to go from store to store looking for an extra dime off.”