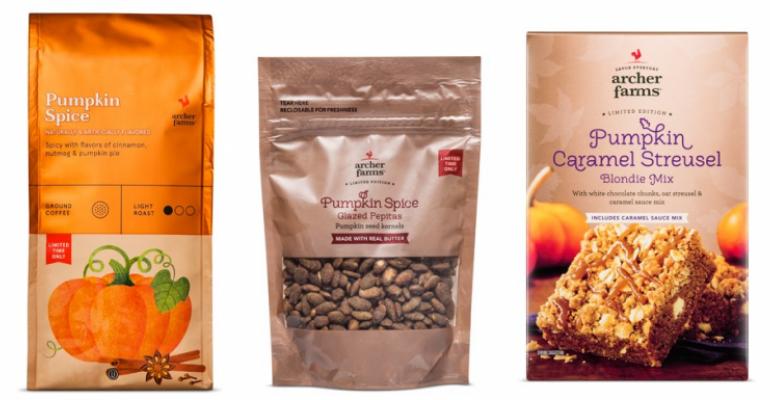 Retailers such as Target are ushering in fall with a slew of limited-edition pumpkin spice-flavored fare.

The mass merchant is more than doubling its assortment of pumpkin spice-flavored private label products this year, according to the company.

“Pumpkin spice is truly a season for our guests,” says Amanda Irish, VP of owned brands at Target, in a statement. “They’re literally hungry for more, telling us they want to enjoy the flavor in more moments throughout the day.”

There are also Archer Farms Pumpkin Spiced Glazed Pepitas and Pecans, which Target suggests can be mixed with roasted butternut squash, a tart green apple, greens and a simple vinaigrette for a fall-flavored salad.

Dessert mixes are also represented in the lineup. They are Archer Farms Pumpkin Caramel Streusel Blondies or Pumpkin Toffee Cupcakes.

Stew Leonard's, meanwhile, built excitement on social media about its own pumpkin-flavored treat.

But the happy feelings may have been short-lived, as demand temporarily exceeded supply.