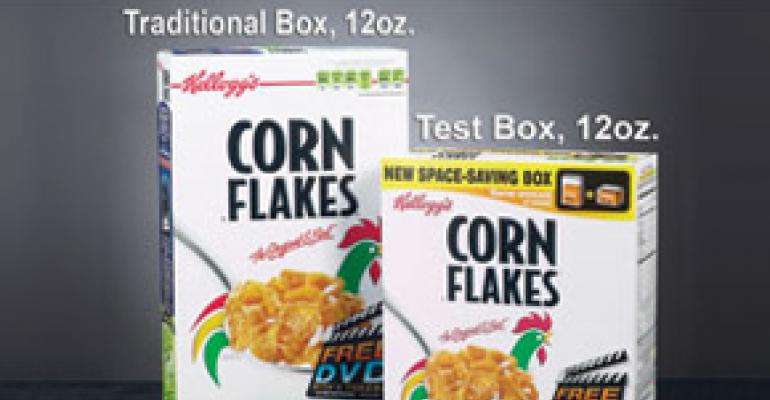 Less than a year after Kellogg's accommodated for rising commodity costs by shrinking boxes of five brands of its cereal while maintaining their retail price, the marketer has once again retooled its cereal boxes. But unlike last June's 2.4-ounce reduction, which flew under the radar of most consumers, the new, more conspicuous change involves the same amount of cereal. The recently revamped 12-ounce

Less than a year after Kellogg's accommodated for rising commodity costs by shrinking boxes of five brands of its cereal while maintaining their retail price, the marketer has once again retooled its cereal boxes.

But unlike last June's 2.4-ounce reduction, which flew under the radar of most consumers, the new, more conspicuous change involves the same amount of cereal.

The recently revamped 12-ounce boxes boast a shorter and wider design that leverages less packaging and makes more efficient use of retailer and consumer shelf space, Brad Davidson, president of Kellogg North America, told SN. The cereal maker is in the midst of a six-month trial of the boxes with retailers in the Detroit market.

“We were able to reduce the air space in the inner bag, allowing us to reduce the packaging size without decreasing the amount of food,” Davidson explained. “We know that consumers desire to save space in their pantries, and additionally, retailers are looking forward to making more efficient use of shelf space and to offer a wider variety of products.”

All told, the redesign translates to an 8% reduction in packaging per cereal box. Since the new boxes use less paper, Kellogg's saves energy during the manufacturing and distribution processes. This reduces greenhouse gas emissions and waste while saving trees.

If all goes well, and other producers follow suit, the experiment could alter the entire cereal aisle, noted Davidson.

One store participating in the trial is Wal-Mart's New Hudson, Mich., location. According to a grocery manager there, shoppers are curious about the new boxes.

“People have been asking a lot of questions about them,” he said. “Mostly, they want to know if they contain the same amount of cereal as the old boxes. Some people have asked if there's actually more [cereal in them], because the packages look bulkier.”

The manager said he usually points out front-of-package messaging that Kellogg's added to assuage shoppers' skepticism about the switch. Every box features an image of a conventionally sized cereal box beside the redesigned one, with an equal sign between the two.

PepsiCo has also set a precedent with its packaging. The beverage maker currently leads the industry in the amount of recycled material used in its containers — 40% to 50% recycled aluminum in its cans and 10% recycled plastic in its bottles — according to company spokesman Dave DeCecco. All of PepsiCo's packaging is 100% recyclable.

“Our new Lipton 1-gallon jug, launched in 2008, is the only package of its kind made with universally recyclable No. 1 PET,” he said. “We're also using less plastic in our packaging.”

Through a combination of “lightweighting” — reducing the amount of plastic and aluminum used in its bottles and cans — and changes in its secondary packaging, PepsiCo has eliminated millions of pounds of plastic, aluminum and cardboard from the waste stream since 2002, he added.

The company has also taken steps to become more aware of its carbon footprint. PepsiCo began by gauging the amount of greenhouse gases emitted during the life cycle of 64-ounce containers of its Tropicana Pure Premium orange juice. It discovered that the agricultural process contributes most significantly to the 3.75 pounds of carbon dioxide emitted during the juice's life cycle. Next it will measure the carbon footprint of Pepsi, Diet Pepsi and Gatorade.

As consumers become more aware of the concept, the company may even begin printing this information on packaging, said DeCecco.

Spartan Stores recently replaced its store-brand Styrofoam egg cartons with recyclable and biodegradable molded-fiber packaging. Molded fiber is produced from old newsprint, corrugated boxes and other recycled paper. Because of this, the cartons can be recycled along with paper.

“Based on last year's sales of Spartan brand eggs, we anticipate that we will keep approximately 675,000 pounds of pulp (fiber) for the new packaging from the landfills and save consumers nearly $100,000 a year by offering this environmentally friendly packaging,” said Alan Hartline, executive vice president of merchandising for Spartan, in a statement. “This packaging makes good business sense, and is good for the environment and consumers.”

Bigger retailers can easily implement such changes, said Stern. Smaller supermarkets, on the other hand, often use the same private-label packers as their competitors and therefore may have to join forces, leveraging their collective power to make something like this happen. But even small changes can make a big difference.

“Start with a project that can be done easily and that has benefits all around — for the environment, the end consumer and your own bottom line,” Stern advised.

Any retailer can stock products whose packaging materials have been reduced. Stern suggests promoting the sustainability of such items in weekly circulars. Retailers could also use POS materials and storewide sustainability signage in order to communicate a clear, consistent message to shoppers.

The Bentonville, Ark.-based chain has indeed been a pioneer in the green movement. The retailer is pushing manufacturers to help achieve a 5% packaging reduction in its supply chain by 2013.

To monitor progress and prompt suppliers to get involved, Wal-Mart began using a sophisticated packaging scorecard in 2007. The scorecard evaluates the sustainability of vendors' product packaging based on greenhouse gas emissions, product-to-packaging ratio, space utilization, innovation and the amount of renewable energy used in packaging production, plus other factors. The retailer then takes a supplier's score into account when making sourcing decisions. Many of the changes made so far benefit all retailers.

ECRM, a Solon, Ohio-based marketing firm, helped develop the scorecard and has assisted Wal-Mart and its suppliers as they attempt to comply with the program's sustainability standards.

“With classes, webcasts and training materials, ECRM is showing companies how best to enter items into the Sustainable Packaging Scorecard and use related tools to find sustainability improvements in their packaging,” said Maria Di Franco, marketing coordinator for ECRM.

“We chose to partner with Packaging Knowledge Group, because of the group's extensive knowledge of sustainable packaging and ability to instruct attendees on how to make sustainability improvements,” she said.

The company has urged suppliers to find ways to redesign or shrink their packaging without diminishing the product inside. Simply removing a layer of wrap is another suggestion commonly offered, she added. One more way that producers can improve their score is by reducing the distance that packaging components travel between where they are manufactured and where they are filled.

While some were concerned that the economic slowdown might impact the program's progress, Di Franco reports that class enrollment has remained steady. She believes that most vendors not only realize the opportunity to help the environment, but to cut internal costs as well.

Earlier this year, Wal-Mart announced plans to accelerate its drive toward more sustainable packaging by making the use of the scorecard available to those supplying its 2,300 stores in Canada, Puerto Rico, Mexico, Central America, Brazil and Argentina. Wal-Mart hopes to reduce packaging by 5% by the end of 2013 in these regions.

It will also launch a Sustainable Value Network to focus on reduced packaging in each market. The SVN will bring together leaders from Wal-Mart, supplier companies, academia, government and non-governmental organizations to explore challenges and develop solutions that benefit the retailer's business and the communities it serves.