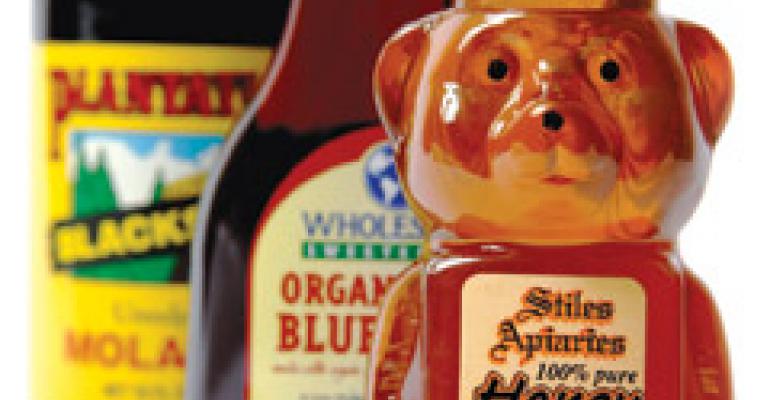 All-natural sweeteners have been integral to the growth of health and wellness. Without them, tabletops and cupboards would be limited to granulated sugar, and an entire generation of functional and new age beverages would not exist.

“People are recognizing that these are natural products, and not chemical alternatives, and that's very appealing to many consumers right now,” said Pat Doherty, category manager for Associated Wholesale Grocers, Kansas City, Kan. “As more people understand that and make that connection, I think it will continue to grow and take up more marketshare within the substitutes category.”

AWG, which operates 75 corporate stores and services many independents, has nearly 50 SKUs of sweeteners available. Doherty says that demand with his customers is such that sugar substitutes today take up half of his business in the category.

“When you compare dollar sales in sugar substitutes, it's nearly 50% of the total sugar or sugar alternatives business,” he said.

At Kings Super Markets, Parsippany, N.J., category manager Dave Farrell has found that the balance of sweetener displays in his stores is shifting to 60-40 in favor of newer varieties.

“As far as the old, stand-by artificial sweeteners, we're down to the best-selling pack sizes,” he said, listing single SKUs with recognizable names like Sweet'N Low, Equal and NutraSweet. The 9-foot sweetener sections in Kings' 24 stores continue to evolve rapidly, he added.

“Splenda still has the largest assortment here in terms of the number of SKUs, but that's even dwindling as new alternatives come out.”

Retailers divvy up the sweetener category myriad ways, though it's almost always located within the baking aisle. Some operators include related items such as sprinkles, while others restrict selection to anything available in tabletop form. Granulated white sugar is by far the dominant seller. Yet concerns over obesity, diabetes and chemical formulas, as well as the human desire for ultimate sweetness, are driving the category in a different direction.

“We're up 3% just in sugar substitutes while sugar is off by 4%,” noted Doherty.

Kings has experienced similar activity, according to Farrell.

The numbers reveal a category in transition. According to SymphonyIRI Group, sales of the most common sweetener — white granulated sugar — increased 6.7% to hit $985 million for the 52 weeks ending Dec. 23.

However, the increase came at a price. Unit sales for the year were down more than 4%, and a review of 2010 shows why: Commodity prices for sugar more than doubled between May 2010 and the end of the year, from 14 cents a pound to nearly 33 cents per pound. During that time, prices increased nearly 30 cents per unit, SymphonyIRI data show.

What's more, the only significant growth came from private label. Sales of store-brand sugar rose 3.3%, while those of most major brands fell. Retailers said this activity can be attributed to the lingering effects of the recession, as consumers cut back spending and sought out private-label items for basic necessities.

Compared to sugar, the ledger devoted to sugar substitutes fared better even though there were fewer real dollar sales and smaller percentage increases. Sales of sugar substitutes during the same period increased just over 4% to reach $405 million. SymphonyIRI figures also reveal that natural alternatives are selling better than their artificial counterparts.

For example, sales of brand heavyweights like Splenda and Equal fell for the period ending Dec. 23 by 5% and 14%, respectively, while those of Truvia — the stevia-based sweetener developed by Cargill — grew 55%. Similarly, sales of the stevia/cane sugar-formulated Sun Crystals brand increased 155%.

“Substitutes like Splenda have a commanding lead; however, some stevia items have come on very strong over the past 12 to 18 months, especially through word-of-mouth,” agreed Doherty.

Friends and acquaintances are one way consumers are learning about all-natural sweeteners. Many purchase tabletop products after tasting the sweetener as an ingredient in a food product or beverage.

“A cup of fruit juice-sweetened yogurt might have 120 or 160 calories, whereas the same serving of naturally sweetened yogurt only has 90 calories,” noted Devin Alexander, a popular chef and author affiliated with “The Biggest Loser,” the reality television series that tracks the weight loss efforts of obese contestants competing in a regimen of diet and exercise. “You're talking about a significant difference here.”

Consumers who notice the caloric contrast have been early and eager adopters of all-natural alternatives. In November, Alexander published her latest book, “The Biggest Loser Dessert Cookbook.” The volume was an eye-opener for her since the show became more strict on what contestants could eat.

“I did a lot of sweetener research because ‘The Biggest Loser’ used to allow Splenda and all of those types of sweeteners, or honey,” Alexander said. “This year, they wouldn't let me use fructose or evaporated cane juice, or anything like that. So it really forced me to look into the natural sweeteners.”

What Alexander discovered is also resonating with consumers. She found that each alternative has both strong and weak points when it comes to food preparation. For example, she found stevia performed better in liquids.

“I'm very excited about it being in all the beverages because I don't want to drink my calories, I want to eat them,” she said. “But it's not the easiest to bake with.”

Similarly, her book calls for substituting light agave syrup for corn syrup in certain recipes. It was how she was able to make what she calls Cut the Crap, a healthy version of a brand-name, non-dairy whipped topping.

Obesity and weight loss are the principal health issues that make sweeteners such a compelling category for consumers. According to research firm Mintel, 95% of respondents polled stated they use some form of sweetener in their lives. Low-calorie versions are used most often, primarily by older consumers who are giving up sugar due to dietary restrictions.

Of all the natural sweeteners on the market, none is growing in popularity like stevia. Some 28% of respondents to Mintel's queries stated that they're using the South American plant and its derivatives more than they did a year ago. Jim May, considered the father of stevia in the United States, is founder and president of Wisdom Natural Brands/SweetLeaf, Gilbert, Ariz. He says stevia is exciting because it reminds consumers that there are natural options to choose from.

“Consumers are feeling deceived, so they're out there looking for something natural,” he said. “And then they read about stevia. Being a plant, it is all-natural.”

Consumption of honey, molasses and similar syrups, meanwhile, has remained relatively stable, while agave has shown slight declines, according to Mintel's research. This possibly could be due to adverse publicity surrounding its high fructose content, as well as its higher price point.

Perhaps the most promising bit of data pertains to sales. Mintel found that sweeteners performed well during the recession as consumers did more cooking, eating and drinking at home. The success of stevia, in particular, opens the door to additional natural sweeteners, including lo han and yacon. Lo han is a sweet fruit grown in China and Thailand; extract made from it is estimated to be 300 times sweeter than sugar. Yacon is a tuber grown in the Andes of Peru and Ecuador, and contains inulin, an indigestible sugar that is already in wide use as a source of soluble fiber in prepared foods.

The potential for new sweeteners hitting the market with the “natural” label might be good for sales, but retailers should exercise caution, industry experts say. Roberta Anding, a registered dietitian at Texas Children's Hospital, Houston, and a spokeswoman for the American Dietetic Association, notes that she always reinforces the idea of moderation whenever she talks with consumers in a supermarket setting. The goal is to reduce consumption, not just to find a substitute.

“Americans have bought — almost hook, line and sinker — the idea that when something says ‘natural,’ they believe it to be safe,” she said. “Natural and safe are not synonymous terms.”

One Lump or Two?

Total U.S. retail sales and forecast of sugar and sweeteners, at current prices.

Rates of consumption for high fructose corn syrup have been falling as the ingredient is replaced in many popular foods and beverages. The Corn Refiners Association has petitioned the federal government for permission to change the name of HFCS to something like “corn syrup,” while an ongoing media campaign seeks to fight all the bad publicity linking the sweetener to the obesity epidemic.

The latest effort is an online ad featuring sex therapist Dr. Ruth and a character dressed as a giant ear of corn. Dr. Ruth helps “Corn Syrup” as he struggles with the public's misperceptions about how much fructose is really in high fructose corn syrup.

“Dr. Ruth has spent her career making people feel good about themselves,” said David Martosko, director of research for the Center for Consumer Freedom, which represents the restaurant, alcohol, tobacco and other industries, and is responsible for the ad. “And if anyone needs cheering up, it's high fructose corn syrup.”