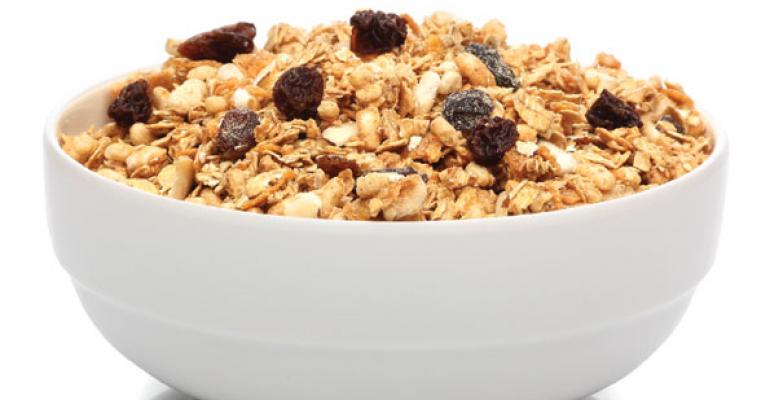 &nbsp; Cereal makers serve up wholesome health by the spoonful.

Faced with flat sales and stiff competition, cereal companies are trying to wake up the category with some healthful innovations.

For large-scale manufacturers, this means marketing functional ingredients like fiber, whole grains and omega-3s. General Mills’ Total Plus Omega-3 contains 10% of the daily-recommended amount of ALA, a short-chain form of omega-3 fatty acid, while Kellogg’s has a “Protein Plus” line of Special K cereal that offers 10 grams of protein per serving. Kids’ cereals like Lucky Charms and Frosted Flakes now carry claims touting whole grains, vitamin D and more.

With all the different nutritional elements, cereals might as well be merchandised in the supplement aisle. Amy McLeod, director of food and nutrition services at Brookshire Brothers, Lufkin, Texas, said she tailors her recommendations to customers based on their lifestyle. For active shoppers, she recommends high-protein cereals. For parents seeking healthful options for their children, she suggests those with plenty of whole grains.

“It’s a great time to be a health-conscious shopper in the cereal aisle,” said McLeod. “Manufactures are really listening to consumer requests for improved nutrition.”

According to a recent snacking survey from market research firm SymphonyIRI, more than half of consumers say they’re trying to reduce the amount of calories, sugar and trans fats they eat. At the same time, 71% say they want to eat more fruit and 60% say they want to consume more whole grains.

Yet even as these concerns have fueled healthful innovations, they’ve also forced the hand of mainstream cereal makers. Recent years have seen a firestorm of negative press over the marketing and nutritional quality of children’s cereals. In December, the Environmental Working Group released an analysis of 84 kids’ cereals that found two-thirds contained more than the federally recommended amount of added sugar by weight. Two cereals, the tests showed, contained more than 50% added sugars.

In response, companies like General Mills and Kellogg’s have agreed to adjust their marketing policies and lower the amount of sugar they put in popular children’s cereals. Critics remain skeptical of these efforts, while others are encouraged by what they see as a step in the right direction. Manufacturers like Newman’s Own and its “Sweet Enough” line of all-natural cereals, meanwhile, have begun marketing around lower sugar counts.

“A lot of kids like the sugary kinds of cereals, but there’s been a lot of innovation in the category so moms can buy better choices,” said Robin Hawkins, health and wellness director at United Supermarkets, Lubbock, Texas.

All of this focus on wholesome nutrition has created an opportunity for old-time favorites like granola, muesli and oatmeal. Bob’s Red Mill decided to develop a new line of granolas after noticing its customers were using the company’s ingredients to make their own blends. Nature’s Path, another leading maker of natural and organic cereals, recently introduced three new flavors to its popular Love Crunch line of granolas.

At Brookshire Brothers, bags of Bear Naked granola have become top sellers in the cereal aisle.

“People like that you can see the granola through the package as opposed to an insulated box where all you see is a picture of the food,” said McLeod.

Oatmeal, too, is seeing a renaissance with instant as well as slow-cooked varieties made using whole grains and unique ingredients like dark chocolate. MOM Brands, formerly known as Malt-O-Meal, offers a Better Oats brand of instant oatmeal that comes in 23 flavors, including maple streusel and organic cinnamon plum. Each is made using flaxseed, real fruit and whole grains.

MOM Brands, like many other cereal makers, has its sights set on expanding its selection of natural and organic options. The company’s Three Sisters brand of hot and cold cereals are featured at Whole Foods Market. Kellogg’s-owned Kashi, as well as Cascadian Farms, which is owned by General Mills, have also expanded to include new flavors and formats.

Judging from consumer surveys, companies have an uphill battle in bringing consumers to the breakfast table. A recent report from the NPD Group, Port Washington, N.Y., found that 31 million Americans skip breakfast each morning.

Cereal makers remain undeterred, however, confident their healthful selections will convince consumers to pick up a spoon and make time for the most important meal of the day.

“It’s an aisle that’s constantly growing and expanding, and companies are bringing out healthier versions,” said United’s Hawkins. “There are so many options out there now, where 10 years ago there was nothing but plain shredded wheat.”

Ever since the industry-developed Smart Choices logo came under fire two years ago, cereal makers have been careful about the healthful endorsements they put on their products. This year, two major manufacturers introduced logos built upon what they believe to be solid science. General Mills put a “whole grain check” on 50 of its cereals, indicating whole grains as the product’s most prominent ingredient. Kellogg’s, meanwhile, added a heart-healthy stamp to nine of its cereals that contain high amounts of fiber and whole grain, which studies show can reduce the risk of heart disease.

Then there’s MOM Brands, formerly known as Malt-O-Meal, which features a “Bag the Box” logo promoting its bagged cereals as a less wasteful, more sustainable alternative to boxed cereals. Linda Fisher, marketing communications manager with MOM Brands, said the company performed a life-cycle analysis on its bagged cereals, which make up 90% of MOM Brand’s lineup, and found they used 75% less packaging than boxed options.

“We wanted to turn what was a negative perception about our brand into a positive,” she said.